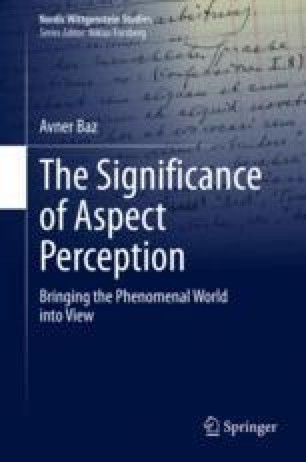 The Significance of Aspect Perception pp 35-52 | Cite as

On Learning from Wittgenstein; or What Does It Take to See the Grammar of Seeing Aspects?

This chapter revisits Wittgenstein’s remarks on aspects, as well as my earlier disagreement with Mulhall on how to read those remarks, but its focus is on Wittgenstein’s general approach—as exemplified in his remarks on aspects—to the elucidation and dissolution of philosophical difficulties. In the second part of the chapter, I apply that approach, as I understand it, to Mulhall’s proposed ‘dissolution’ of the ‘paradox’ of aspect-dawning. This critical engagement with Mulhall was my first sustained attempt to practice what I then thought of as Wittgensteinian therapy, and later also came to think of as a form of ordinary language philosophy.

Note added 2019: As noted in the Introduction, this paper was originally published together with a response from Stephen Mulhall (‘The Work of Wittgenstein’s Words—A Reply to Baz’, in Day, W. and Krebs, V. (eds), Seeing Wittgenstein Anew, New York: Cambridge University Press, 2010). In preparing the paper for the present collection, I have decided not to add to it specific responses to Mulhall’s response, beyond what I say in the Introduction about how I presently see our original disagreements. I will only add that I regret the somewhat overly-combative tone of my original paper. If I were to write it today, its tone would be different.