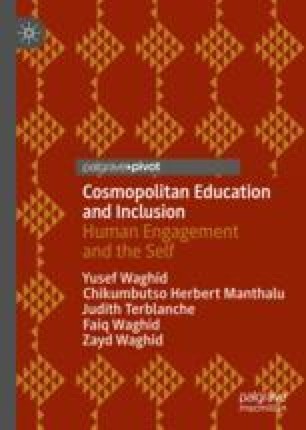 Citizens of the World: A Neo-Kantian View

In this chapter, we expound on Martha C. Nussbaum’s notion of universal hospitality in the pursuit of universal aspirations and world co-operation in an atmosphere of respect and human dignity. We specifically show why respect for cultural differences and an enactment of human responsibility can contribute towards confronting human problems on the basis of critical argumentation and deliberation as human beings endeavour to eradicate prejudice, inequality and injustices vis-à-vis their educational concerns. Nussbaum frames her understanding of cosmopolitanism in light of Greek Stoicism, which considers the basis for human community as constituted in the worth of reason in each and every human being. We specifically expound on the idea of a cosmopolitan as a citizen of the world whose dignity is bounded by reason and respect for other human beings. Thereafter, we show how such a view of cosmopolitanism influences education, more specifically teaching and learning at universities.