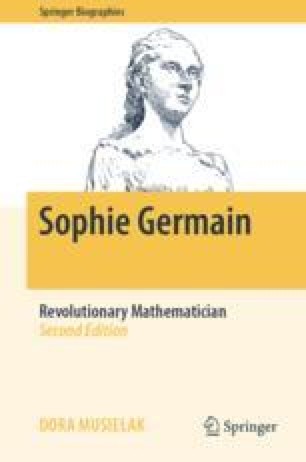 It is the autumn of 1804. Sophie Germain is twenty-eight, a woman ready to assert her worth as a serious scholar. By her own account, she had been studying the theory of numbers and had built the necessary skills to understand the theorems in Legendre’s Essai sur la théorie des nombres. Now Germain began courting the affirmation of her mathematical efforts from the pre-eminent authority in the purest of mathematical science: Gauss. Three years earlier, Gauss had captivated Germain with a new approach to study “higher arithmetic” or arithmeticae sublimiori, as Gauss called it. This is the branch of mathematics dedicated to the general study of the proper, particular properties of the integers, which now we call number theory.