The Unforeseen Impacts of the 2018 US Midterms 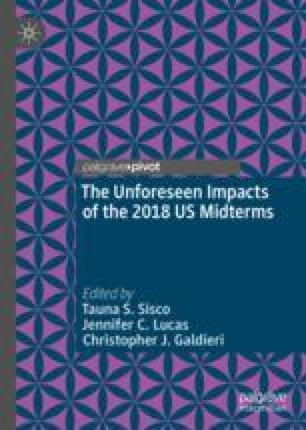 Stemming the Tide: The Impact of Redistricting on the 2018 Midterm Election

In the 2018 election, the Democratic Party rode a midterm wave to win a majority in the US House of Representatives. Throughout the campaign and its aftermath, a great deal of attention has been paid to the effects of gerrymandering, sorting, and district boundaries on the outcome of House races. We assess the impact of current district boundaries on electoral outcomes, using actual election results from 2018 alongside those generated by a simulation technique that relies upon advanced geographic information systems (GIS) and principles of graph theory. We find that redistricting practices in Republican-drawn states were at least partially effective in stemming the blue wave, allowing them to hold more seats than we would otherwise expect. Finally, we demonstrate that the insulating properties of Republican redistricting efforts also impacted the makeup of state legislatures, which could impact House redistricting in 2020.

McCarty, Poole, and Rosenthal (2009) first used this approach to examine whether gerrymandering contributed to partisan polarization. Their simulations broke counties into 1000 person blocks and reaggregated them into equally populated “districts,” which were then used to predict electoral outcomes. This simulation technique was further refined in 2013, this time using a geometry-based simulation approach (Chen and Rodden 2013) using actual election returns (as opposed to artificial population blocks) from several states such as Florida. Chen and Rodden’s algorithm assembles the voting precincts into areas with roughly equal populations and aggregates the presidential returns from the precincts to the “district” level in order to find a predicted winner. They compare actual and simulated results to estimate the effect of gerrymandering on partisan representation. They further developed their algorithm with nationwide data a by splitting precincts into 2000 person blocks (Chen and Cottrell 2016), seeking to prioritize compact precinct shapes when creating simulated districts.

Our approach, including the one presented here, uses graph-based computer simulations to generate a baseline of “possible” districts using a graph-theory-based approach. We argue this has several advantages over other recent approaches. With a graph-based approach, the geometry of a district (and its underlying units) is largely ignored. Instead, we aggregate districts based on adjacency; if a precinct is touching a partially formed district, then it can be aggregated into a simulated district. First developed by us (see (Powell et al. 2017a, b) and later adopted Magelby and Mosesson (Magleby and Mosesson 2018)), this approach is relatively simple. It aggregates parcels of land into districts and trades them randomly between districts in a process called “refining.” It does so until all of the precincts in the state have been assigned to a district, at which point underlying data from past election results are used to predict the “winners” of the simulated district. We explain the details of this algorithm in further detail below.

Our approach is an improvement over previous methods for several reasons. First, it allows us to determine the “natural” partisanship of a state by quickly and efficiently creating a large sample of randomized districts. Second, it does not make the faulty assumption that redistricters are able to control geography, as is the case with simply measuring geometry or using geometry-based simulations. Finally, it does not assume that previous districts were not gerrymandered; instead, it allows us to compare previous districts, current districts, and proposed districts to a “natural” baseline in a way not previously possible. In the next section, we explain our method in more detail.

In order to assess the effects of current redistricting patterns on the 2018 midterm election, we proceeded through several steps. First, we obtained election returns at the county level (courtesy of Stephen Pettigrew) for the 2018 midterm elections (Pettigrew 2019). This dataset included voting results for US House and Senate, as well as for gubernatorial and state legislative races. Second, we adapted these data to the precinct level using the principle of “even partisan swing” (see Katz et al. 2018). Essentially, this assigns election results to smaller units based on previous election results; for example, if precinct A in county X had 10% of Republican votes in the 2008 election, then it was assigned 10% of the Republican votes in the 2018 election. While there is some misattribution of votes (with small amount of votes being attributed to the incorrect candidate), it has been shown to be an efficient way of handling geographic data (Gelman and King 1990). For this operation, we use reference data from the 2008 nationwide precinct map (Stanford Spatial Social Science Lab 2012).

Next, we used gpmetis, a type of graph partitioning algorithm (Karypis and Kumar 1999), to draw a series of randomly simulated districts. To do this, we first used ArcGIS to extract an adjacency matrix for precincts in each state. An adjacency matrix in this instance is simply a list of each precinct along with all of the precincts with which is connected. We eliminated precincts that only touch at a single discrete point, as this would allow simulated districts to cross each other in a way that it not possible in the real world. We then paired this adjacency matrix was with a population list, which allowed us to simulate districts that were within 1% of population in each state. In states where county boundaries are required by law to be prioritized when drawing districts, we removed edges connecting counties and then randomly assigned an edge to reconnect each of the now separated counties.

We then processed the adjacency matrix and population in gpmetis for each state. gpmetis works through two distinct operations. First, the graph is “coarsened”—in this case all of the precincts in a state—into larger “nodes,” which in this case are districts. We illustrate this process in Fig. 2.6, which shows how a sample state is divided into four, and then two, partitions. Second, gpmetis “refines” the graph by breaking off pieces of the aggregated district and randomly trading them with neighboring districts at each level of the partitioning. It does this in a way that minimizes the number of connections between each district, otherwise known as edge-cut compactness (rather than geometric compactness, which is concerned with shape (Dube and Clark 2016)). For this study, coarsening was carried out 50 times for each state, while refining was carried out 1000 times per coarsening. In turn, we repeated the entire process 1000 times for each state at the state legislative (lower and upper houses) and congressional levels.

While Magelby and Mosesson (2018) also use gpmetis, their application suffers a fundamental flaw. It employs “queen” connectivity, which includes all “point connections” between districts. These point connections are common in states that have sparsely populated precincts (such as those in the Great Plains) that tend to be rectangular. Using these types of connections allows simulated districts to overlap one other, which is impossible in the real world. Our application removes these connections between precincts, providing simulated districts which correspond to actual practice.

Once we obtained simulated districts at the congressional and state legislative levels, we then used election return data to estimate how they would have voted. We did so for every state except Kentucky and North Carolina (due to a lack of gubernatorial or US Senate elections in 2018) and New Hampshire and Vermont (due to data quality issues in the shapefiles provided by the US Census Bureau). We repeated this process also using 2016 election results obtained from the MIT Election Data and Science Lab (MIT Election Lab 2019).

In order to provide an estimate of the impact of redistricting practices on 2018 election results, we divided the difference between the simulated and actual results for the 2018 election by the predicted results for the 2016 elections. This measurement reflects the proportion of simulation delegation share in 2018 that is explained via the gap in losses and gains from one year to the next.