The Palgrave Handbook of Incarceration in Popular Culture 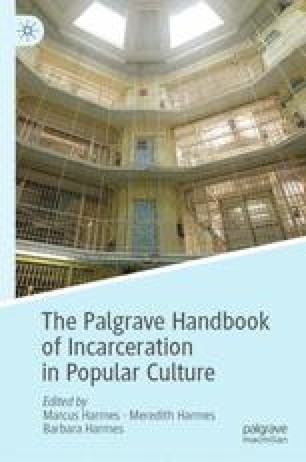 This essay examines the relationship between abjection, control and surveillance in the post-9/11 science fiction film, Minority Report (Spielberg, 2002) as a reflection of the contemporary sociocultural preoccupation with scrutinizing the lives and actions of others. The film centers on detecting crime before it is committed through the visions of three gifted beings whose precognitive foresight enables the imprisonment of potential perpetrators. The perpetrators are maintained in a seemingly unconscious state in a panoptic futuristic prison and, like the three precognitives, their memories and thoughts are also made accessible. This film, like others including Prometheus (Scott, 2010), and Inception (Nolan, 2013), thus involves not only physical isolation in a cataleptic state through technological means, but also access to interior, psychic spaces in an exercise of absolute control. As a result, memories, desires, dreams and visions are made available for consumption by others. Invariably dependent on sophisticated technology, the film depicts surveillance as being intrusive on one’s privacy to the extent that, in some cases, individual identities are compromised or repressed permanently. For example, the three visionaries exploited by the Pre-Crime division are maintained in conditions that completely inhibit any sense of personality, corresponding to the loss of self-identified by Julia Kristeva (Powers of Horror: An Essay on Abjection, Columbia University Press, New York, 1982) as a state of abjection. Moreover, their restriction to a fluid-filled pool and their inability to walk independently has further alliances with Kristeva’s notion of the abject form in that they effectively revert to a semiotic condition. Overall, surveillance and the repression of identity are central to Minority Report, with futuristic eye-scanners able to identify individuals instantly and a Pre-Crime department that monitors potential imminent homicide and takes pre-emptive action. Watching is therefore linked closely to control, which is ultimately enabled through the use of a ‘halo,’ a device that stuns its victim. Wrongfully suspected of being about to commit a crime, protagonist, John Anderton (Tom Cruise), is captured, ‘haloed’ and incarcerated in a prison where his conscious mind is likewise suppressed. Surveillance in Minority Report therefore aims to induce control via technology and, although this arguably exemplifies Gilles Deleuze’s (Negotiations, Columbia University Press, New York, 1995) notion of a ‘control society’ (whereby individuals might be electronically tagged and released from institutions), it paradoxically leads to the opposite extreme. Engaging theoretically with Kristeva’s theory of the abject and Deleuze’s concept of control, this chapter analyzes Minority Report as a case study of the ways that futuristic prisons lead to a loss of identity in an increasingly technological world.