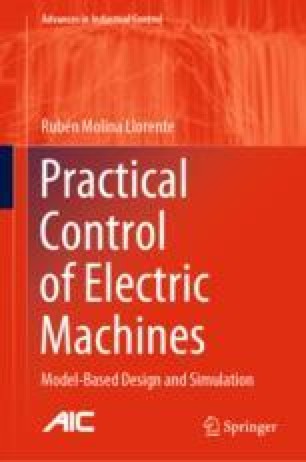 The magnetic and electrical behavior of the electrical machines can be defined with a mathematical model, which is a fundamental part of its analysis and for the realization of simulations based on models. Electric machines generate rotating movement of their loads by mechanical systems which can also be modeled. The electrical machine describes a continuous-time model by its nature as most systems, but can also be described by the discrete-time model. The discrete model is useful for integration in a DSP/FPGA due to its high power calculation with the objective of real-time control testing without the need to use a real plant (real machine), reducing the development time as discussed in Chap.  1. The continuous and discrete models with state-space equations permit to describe entirely if the system is controllable and observable, something that does not happen with the transfer function. In this chapter, the DC and the different AC machines as IM, PMSM, SynRM, and PMASynRM are described with their models in continuous state-space methods. In addition, the discrete model of the PMASynRM will be developed for its implementation in Simulink®, which can be used for C code generation, to be able to run it in real-time in a DSP or FPGA. Moreover, the closed-loop control of the current loops will be introduced in order to verify the effect produced by the inherent cross-coupling of the AC machines, as well as a solution to the decoupling that optimizes its control.