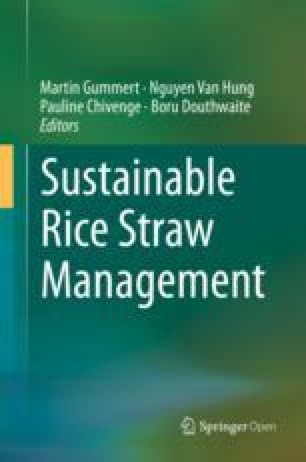 Current practices in rice production leave a huge amount of wet straw on the field, which cannot be used as feed or for food production. Compost production is one way of effectively utilizing rice straw. Spent rice straw from mushroom production is also used as compost but this has low nutrient value and is poorly decomposed when using it as a soil improver. This wet, low-quality straw, as well as byproducts from mushroom and cattle feed production, could be used to produce better-quality compost to return nutrients back to the field. Mechanization in mixing the materials, i.e., a compost turner, is necessary to have good aeration, increase the decomposition process, and reduce labor cost. This chapter provides an overview of composting technology and current practices of rice-straw composting. Updated information on this topic, resulting under the current BMZ-funded IRRI rice-straw management project (2016–2019), which has been implemented in Vietnam and the Philippines, is also included here, particularly in the sections on vermin-composting and mechanized composting.

Composting converts organic mass, such as rice straw, other agricultural by-products, digestive, animal wastes, etc., into a more decomposed product, called compost. Composting is necessary because it can help to increase significantly the quality of the compost product based on the optimized nutrient factors and the decomposition process (Diaz et al. 2007). Compost is used as a soil improver or directly as a planting substrate. Application of compost results in an increase in, not only crop yield, but also soil fertility (Goyal et al. 2009; Vo-Van-Binh et al. 2014).

Compost quality is strongly affected by the factors happening during the composting process, such as temperature, pH, carbon-to-nitrogen ratio (C/N), etc. These factors can be controlled through bio-, chemical-, and physical methods or a combination of these to optimize the composting processes and products. This chapter provides an overview of the main factors including temperature, pH, C/N ratio, moisture content, and properties of the feedstock.

In composting, waste products are mixed followed by creating conditions to enable biological decomposition to result in a higher-quality organic resource. The speed of the composting process and the quality of compost depend on the type, quality, and chemical and physical properties of the raw materials, conditions, and environment during the process. Typical physical and chemical properties of different raw materials for composting are shown in Table 3.1.
Table 3.1

Chemical and physical properties of raw materials for composting

Temperature effects on the composting process can be divided into the four phases, (1) mesophilic, (2) thermophilic, (3) cooling, and (4) maturing. During the initial phase of decomposition and break down of compounds, heat is generated due to the bio-oxidative microbial degradation (Diaz et al. 2007). This phase is facilitated by mesophilic bacteria, which become less competitive as temperature increases up to approximately 40 °C when thermophilic bacteria become predominant. At about 55 °C, destruction of plant pathogens occurs (Shilev et al. 2007) and then complete hygienization takes place at temperatures of 60 °C and above (Shilev et al. 2007). However, temperatures exceeding 65 °C should be avoided as they may harm even useful microbes (Shilev et al. 2007). According to Haug (1980), the composting temperature has to be above 55 °C for three consecutive days to kill the pathogens. The temperature of compost reaches 60 °C after 10 days and lowers to ambient temperature from 60 to 90 days of composting (Jusoh et al. 2013). Temperature could be controlled effectively through aeration and mixing in the cooling-down stage. The final humus is then produced after the maturing phase.

Temperature patterns during the composting process with effective microorganisms (EMs) and without EMs similarly have been shown to fluctuate over time (IRRI 2019; Jusoh et al. 2013). These studies conducted the experiments on vermi-composting using rice straw, cow manure, shredded banana trunk, and African Night Crawler (ANC). The temperature profile during composting is shown in Fig. 3.1. Temperature of the composts reaches to 70 °C during the first and second phases (thermophilic) of the composting process, and then cools down to from 22 to 35 °C finally balancing with the ambient temperature.

The C/N ratio of the residue to be composted is one the most important factors affecting the quality and period of composting. In addition, the composition and the mixing ratio of the raw materials used for composting influence the quality of the compost. For an optimal process, a C/N ratio in the range of 20–30 is generally recommended (Vigneswaran et al. 2016). Higher ratios lead to longer composting periods due to slower decomposition whereas, at lower ratios, nitrogen can be rapidly lost by conversion into gaseous forms (as ammonia or nitrogen), affecting the compost quality. Thus, it is necessary to mix straw with a high-quality organic material such as manure in order to have a suitable ratio of C/N (25–30) for composting process (Ameen et al. 2016). Due to the low C/N ratio of cattle manure, it was adjusted to 25 by adding sawdust or rice straw (Qiu et al. 2013; Jusoh et al. 2013).

Vermi-composting is a biological process of bio-oxidation and stabilization of organic material involving the joint action of earthworms and microorganisms (Aira et al. 2002). While microbes are responsible for the biochemical degradation of organic matter, earthworms serve as the important drivers of the process in conditioning the substrate and alteration of biological activity. The end product, or vermi-compost, is a finely divided peat-like material with high porosity and water-holding capacity that contains most nutrients in forms that are readily taken up by the plants (Dominguez and Edwards 2004). The invertebrates have indirect effects on the structure and activities of bacterial and fungal communities through inoculum dispersal, grazing, litter combination, gut passage, and aggregate formation (Anderson 1987). The use of earthworms in compost heaps, beds or boxes makes the process faster for the breakdown of organic waste and its decomposition, i.e., composting (Edwards et al. 1989; Gaur and Sadasivam 1993).

Vermi-composting technology is employed using windrows for composting. A windrow consists of layers rice straw, manure, and shredded banana trunks. Water is added during windrow building to reach a moisture content of 60%, which is a suitable condition for composting. A field trial of vermi-composting was conducted in 2017–2018 at IRRI in the Philippines (IRRI 2019). The experiment was set up with a windrow height of 1 m, a width of 1.5 m. It was composed of four layers of rice straw, cow manure, and shredded banana trunk (Fig. 3.2). From the total amount produced in every windrow, it is expected to recover 50% of the vermicast.

The vermi-compost consists of two composting stages, anaerobic and aerobic. Anaerobic composting is implemented during the first 40 days by covering the compost heap with a plastic sheet that reduces the exchange of air between the atmosphere and the compost. The covers are then removed for the next 40–50 days. The ANC, which is introduced during the aeration phase, is one the popular species of earthworm used for this process. Watering of the windrows is also essential for ANC to thrive, grow, and be efficient in producing vermicast. Water is applied for every windrow, 100 L for 1000 kg of composting materials for every other day from day 40 to day 80, and daily from day 81 to day 93. To efficiently manage water use, drip-irrigation technology is recommended. The vermicast recovery ratio is 1:2, which means that, with a total input of 1000 kg of compost, 500 kg of vermicast are recovered.

The windrow-composting method consists of linear rows of compost materials (rice straw and cow manure), which are placed layer by layer and mechanically turned periodically. The air contained in the interspaces of the composting mass varies in composition. The CO2 content gradually increases and the O2 level falls during composting process. The concentration of O2 for composting varies from 15 to 20%. (Diaz et al. 2007). Thus, the turning process helps improve aeration and mixing of compost constituents. The windrow composting method relies on mechanical aeration, typically with a compost windrow turner, to optimize the composting process. During turning, microbial inoculum is mixed with water and sprayed in the windrow to speed up the composting process and obtain the required moisture content. The interval between turnings is usually 10–14 days (IRRI 2019), but 15-day intervals have also been reported (Muzamil 2012). After turning, the windrow is covered using a plastic sheet to maintain the proper moisture content and temperature. The height and width of the windrows are typically set to fit the size of the turner.

The turner is pulled by a tractor through a trail linkage system. The rotor of the turner is powered by the tractor’s power-take-off shaft. The blades installed on the drum rotate to turn the materials in the windrow when the machine moves forward. After the turning, the substrates are pushed to the middle of windrow. According to IRRI (2019), the turner hauled by a 30- to 50-HP tractor has a capacity of 30 t/h.

The resulting compost can help improve rice productivity (see Chap.  9) and other crops, particularly vegetables. Additionally, the application of the compost to rice production decreases greenhouse gas emissions compared to when fresh straw is incorporated in situ (see Chap.  10). The process serves to bring value to the waste products that would otherwise have environmental consequences.

The best practices of composting described here can help optimize the quality and nutrient efficiency of the mixture of rice straw and animal manure used to improve soil and crop productivity.

The application of composting technology and the compost turner can contribute to reducing labor costs in turning, creating alternative uses for rice straw, and increasing farmers’ income by adding value to rice and other related uses, such as mushroom production. In addition, increasing the value of the rice straw, especially low-quality straw, leads farmers to avoid burning it in the field.