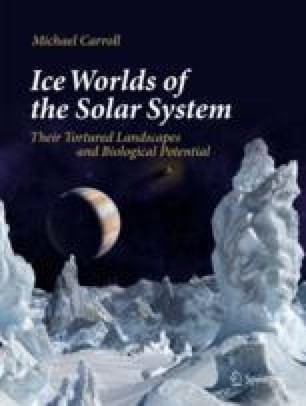 A Survey Through Lenses and Spacecraft Eyes

The first ice worlds seen by a human were Europa, Ganymede, and Callisto. They were observed with their rocky sibling, Io, on January 7, 1610. Jupiter’s moons drifted in the eyepiece of Italian observer Galileo Galilei as he studied the king of worlds (Fig. 3.1). In his sketchbooks, Galileo noted that, “On the 7th of January, Jupiter is seen thus…On the 8th thus; it was therefore direct and not retrograde…The spacing of the 3 to the west was no greater than the diameter of Jupiter and they were in a straight line.” Galileo was able to estimate the periods of the four moons at 42 h, 3.5 days, 7 days, and 16 days.