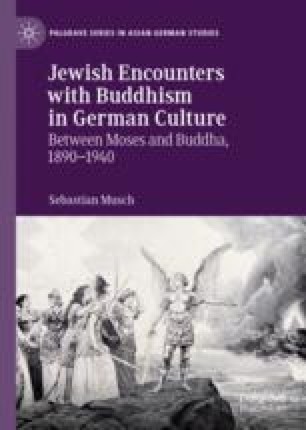 The Bridgebuilders: Jewishness Between Asia and Europe

In this chapter the author discusses the German-Jewish writers Lion Feuchtwanger, Paul Cohen-Portheim, Jakob Wassermann, and Walter Hasenclever and their ideas on Buddhism and Jewishness. These authors exhibit an exoticist fascination with Buddhism, India and China, or the East more generally. Some wrote explicitly Buddhist works, while others implicitly incorporated elements of Buddhist thought into their oeuvre, which often went undetected by their audience and/or critics. Even though they often distanced themselves from their Jewish upbringings, they nevertheless retained some level of Jewish identity. Buddhism was appealing because it was perceived as a philosophy and not as a religion. The author examines this intersection between Buddhism and Jewishness and how concepts of Jewishness aligned with the perception of Buddhism.