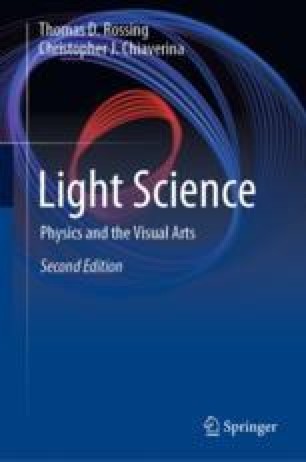 Photonics—Light in the Twenty-First Century

When first invented, the laser was described as an invention in search of an application. Few predicted that lasers would ultimately have applications in medicine, agriculture, commerce, optical communication, astronomy, manufacturing, and security. With light now having uses in almost every area of human endeavor, it’s no wonder that it is said that we have entered the photonic age, a time in which photons are used in a manner similar to the way electrons are employed in electronics.

A technology designed to improve the performance of astronomical optical systems by compensating for distortions introduced by medium between object and image.

Optical storage device that uses a laser to write and read data stored as small pits on a reflecting surface.

A data storage system in which information is stored throughout a volume rather than just on the surface, as is the case with other optical storage methods.

Semiconductor junction diode that emits light of a particular color when excited by an electric current.

Stores data that can be read out using the Kerr magneto-optical effect.

Rotation of the plane of polarization when reflected by a magnetic surface. Direction of rotation depends on direction of magnetization.

The study of the universe using a wide range of wavelengths.

A device that uses visible or infrared light, rather electric current, to perform digital computations.

Semiconductor junction that conducts electricity when illuminated by light. Used to detect reflected signals from an optical storage disc.

A branch of physics and technology that deals with the properties and applications of photons.

A device used in holographic data storage systems to modulate amplitude, phase, or polarization of light waves in space and time.