Revealing the Most Energetic Light from Pulsars and Their Nebulae 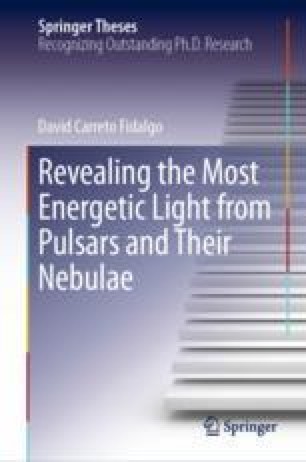 An Introduction to Very-High-Energy Astrophysics

Astronomy is one of the oldest natural sciences and has always been an important part of human culture. Astronomical observations can be traced back to the Stone Age manifesting itself in ancient beliefs and structures such as references to Egyptians gods or Stonehenge. For most part of astronomy’s history observations were limited to the light visible to the human eye. Only in the 20th century technological advances, the development of new techniques and serendipities lead to the opening up of the whole of the electromagnetic spectrum. At the low-energy end of the spectrum, the first observations were made from the ground by radio telescopes in the late 1930s, whereas at the high-energy end the first evidence of cosmic gamma rays came from detectors aboard satellites in the late 1960s. The reason why high-energy astrophysics is primarily conducted from space, lies in the Earth’s atmosphere as illustrated by Fig. 1.1. While for the visible and the radio part of the spectrum the atmosphere is mostly transparent, X-rays and gamma rays are completely absorbed by it. Only at the highest energy end, above a few tens of GeV, observing the violent absorption process in the atmosphere makes the detection of gamma rays possible from the ground.

The aim of the astrophysical sciences is two-fold - the application of the laws of physics in the extreme physical conditions encountered in astronomical systems, and the discovery of new laws of physics from observation.

Cite this chapter as:
Carreto Fidalgo D. (2019) An Introduction to Very-High-Energy Astrophysics. In: Revealing the Most Energetic Light from Pulsars and Their Nebulae. Springer Theses (Recognizing Outstanding Ph.D. Research). Springer, Cham. https://doi.org/10.1007/978-3-030-24194-0_1