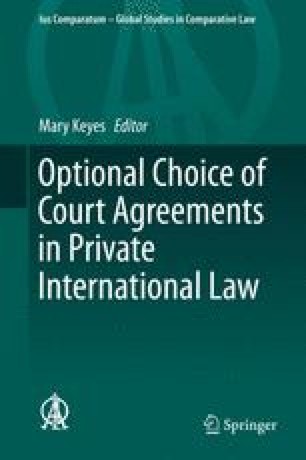 Japan: Quests for Equilibrium and Certainty

Japanese law in the area of choice of court agreements has been striving to find an optimal equilibrium between the interests of the parties to such agreements as well as to ensure certainty and predictability in its application. In a quest for an optimal equilibrium, a recent amendment to the Code of Civil Procedure has introduced special rules for consumer contracts and individual employment relations, which are applicable to all choice of court agreements pleaded before the Japanese courts. Those rules have obviated much of the need to rely on the amorphous concept of public policy, resulting in greater certainty. In a further development, a new provision is shortly to be inserted in the Civil Code which seeks to ensure an optimal equilibrium between parties to a standard form contract (whether or not it is a consumer contract). It may be invoked to challenge asymmetrical choice of court agreements when they are governed by Japanese law. The test is whether the terms are so unfavourable to one side as to contravene the principle of good faith. Since the notion of good faith is nebulous, the new provision may introduce an element of uncertainty into this area of law. It goes to show that a tension can arise between a quest for equilibrium and a quest for certainty. Another cause for uncertainty which exists in the current law and ought to be tackled is the absence of clear rules for determining whether a choice of court agreement is optional or exclusive.