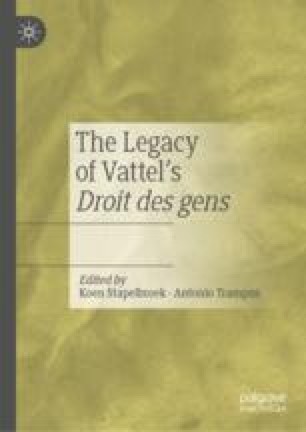 This chapter discusses Emer de Vattel’s relatively unknown three-year stay in Poland (1760–1763). It first focuses on Vattel’s role in establishing a network of Swiss and Polish reform thinkers; then on the imprint which he left on Polish late eighteenth-century authors. Significantly, while in Warsaw, Vattel aligned himself with the Economic Society of Bern and its French secretary Elie Bertrand (1713–1797), whose economic reform agenda can be seen as complementary to his own vision of an international order. Simultaneously, his stance on the question of international intervention, based on a nuanced understanding of modern commerce, inspired Polish thinkers attempting to delegitimise the first partition of Poland.

My thanks to Béla Kapossy and Graham Clure for their comments on earlier versions of this article. Parts of the article were informed by discussions surrounding the ongoing research project Enlightenment Agrarian Republics: From Vaud, to Poland, and America, financed by the Swiss National Science Foundation (project number 100011_172846).