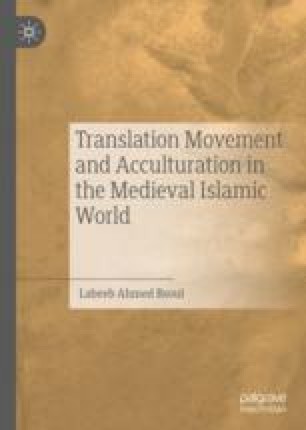 The Toledo School of Translation

This chapter highlights the translation movement in Andalusia in general, and the translation movement of Toledo in particular. It should be noted that the word “transmitter” was used as a term for the word “translation” in ancient Islamic sources. The Toledo’s translation movement in general underwent four main stages—the first phase: the transferring of Greek, Indian, and Persian thought into Arabic through the Syriac language; the second phase: transferring of Islamic culture written in Arabic into Latin directly; the third phase: the transferring of Islamic culture written in Arabic into Hebrew; the last stage: transferring the Islamic culture written in Arabic into Latin. The beginnings of the translation efforts during the reign of Prince Muḥammad, where scholars began to move towards the demand of science, prompted some scientists and students to travel to the East to meet the elders of science and benefit from their knowledge—in particular, astronomy, medicine, mathematics, philosophy, and Qur’ānic studies. The Andalusians’ concerns were the translation of the Greek relics, which were imported from them or brought to them by the emigrants. A great event took place in the second half of the sixth/eleventh century, leaving a deep impression on the translation movement in Andalusia. The seizure of the Alfonso X the city of Toledo in 478/1085, and the fall of Sicily in 484/1091, by the Normans, at that time with the Crusades against the Orient, lasted two centuries. At the time, there were three main centres of translation: Andalusia, Sicily, East/Orient, especially Baghdad, but Andalusia was the most famous.