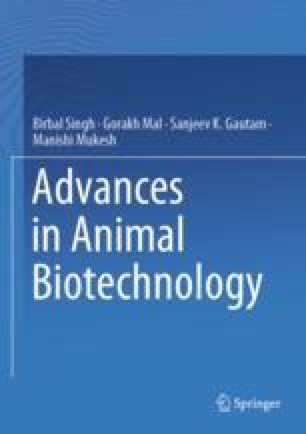 The probiotic engineering is a cutting edge technology for improving disease diagnosis, treating gastrointestinal disorders and infectious diseases, and improving nutrition and ecological health. Use of bioengineered microorganisms in animals has different targets and prospects owing to differences in their anatomy, physiology, and feeding habits. In ruminants, the bioengineered microorganism is primarily aimed to enhance nutrient utilization, detoxify toxic plant metabolites, and lessen the enteric methanogenesis, while in non-ruminants, the bioengineered microorganisms are aimed to enhance nutrient utilizations, confer protection against pathogens, and inhibit infectious agents.

Availability of quality forage is the major problem impeding livestock production in most developing countries. As humans and animals have requirement for grains and protein-rich bioresources, the demand has increased for production of pulse crops and animals used for meat.

The long-range goal should be to develop genetically engineered microbes which are able to colonize GI tract of animals and enhance the supply of nutrients to animals. It is necessary so that nutrient requirements of high-yielding animals can be met from low-quality forages or silages, and dependence on grains or protein concentrates is minimal. In addition, genetic engineering has important applications such as detoxification of anti-nutritional phytometabolites present in native forages, crop residues, and agro-industrial byproducts used as animal feed, and minimizing methane emissions. Despite huge task to be solved, the success achieved is limited, and much remains to be done in future.

The quantity of nutrients required in high-yielding cattle or buffaloes is more than the nutrients available in conventional forages and metabolic capacity of rumen microorganisms. This is because high-yielding animals require higher amounts of readily fermentable carbohydrate and protein-rich diets. The recombinant microbes used as feed additives can fill this gap.

As the development of therapeutics to prevent bacteria, fungi, and viruses infectious diseases is a routine activity of researchers, academicians, and veterinarians associated with livestock industry, this article is confined to developments in microbial therapies against infectious agents of GI, genitourinary and respiratory tract of livestock species. Importance of important body microbial niches with reference to their relevance to animal performance is highlighted.

7.2 The Era of Bioengineered Microorganisms

The bioengineering of microorganisms intended for use as feed supplements or probiotics is known to commence with the development of probiotics targeting enteric pathogens (DeGrandis et al. 1989). Applications of computational engineering, recombinant DNA technology, and synthetic biology have offered enormous possibilities to utilize microorganisms and eukaryotes for producing a variety of therapeutics and nutraceuticals targeting a range of humans and veterinary applications (Challinor and Bode 2015; Ozdemir et al. 2018; Pedrolli et al. 2018).

With the development of a Lactococcus lactis for delivery of recombinant anti-inflammatory cytokine interleukin-10 (IL-10), intended to treat inflammatory bowel disease (IBD) (Steidler et al. 2000), the field bioengineering of probiotics has advanced swiftly as a premier area of research in nutrition and antibacterial and anti-viral therapies.

Interspecies transinoculation of rumen bacteria is a well-known phenomenon to alleviate forage toxicity in animals. The recombinant probiotics are tailored to produce proteins to induce cytotoxicity or tumoricidal activity in internal tumors, or for delivering therapeutic proteins to tumors that are inaccessible for delivering therapeutics (Singh et al. 2017; Ma et al. 2018). In animals, the emphasis is on developing genetically modified probiotics to enhance nutrient utilization and confer protection against infectious agents.

Pig, poultry, and fish are the non-ruminants. They are least efficient to utilize certain feed components such as cellulose, phytic acid, saponins oxalates, etc. The unutilized components released in feces into environment act as pollutants. Therefore, efforts are made to develop recombinant microorganisms that can be used as microbial feed supplements in pig, poultry, or fish.

Bioengineered microorganisms have a pivotal role in nutrition, therapeutics, and health industry. Besides delivering drugs and gene-therapy vectors with efficiency and site-specificity, the bioengineered microorganisms have provided a lot of valuable products for diagnosis and treatment of diseases. Genome engineering and synthetic biology that allow design and construction of genetic circuits, and precise fine-tuning of transgene expression, have opened up new frontiers to augment the therapeutic and nutritive potential of the probiotics.

Until recently, the microbes inhabiting urinary tract were studied by empirical culture-dependent methods that are unable to depict the complete outline of microbiota. Since the cultivable microorganisms merely represent a fraction of total microbial diversity, it is envisaged that the microorganisms that are not cultured, and therefore remain unexplored, play important role in the health of the mother and neonates (Hyman et al. 2014).

Deciphering how the microorganisms interact with each other and with uterine epithelium is fundamental for a more complete understanding of feminine reproductive health (Singh et al. 2013). These culture-independent approaches have provided information about novel, previously unidentified uterine microbiota in different endocrinological milieus, and support a shift in the microbiome during assisted reproduction and pregnancy outcomes.

In this context, it is necessary to analyze complex microbial niches, genes, and metabolic pathways therein for developing alternatives therapies that are safer and effective against antibiotic-resistant microorganisms (Thallinger et al. 2013; Cardona et al. 2015).

One of the major challenges in modern medicine is paucity of alternative therapies against drug-resistant pathogens. Genitourinary tract infection is one of the many major causes of infertility in dairy and beef cattle. The vaginal microbiota dominated by LAB confers protection against bacterial infections. Recombinant microbiocides may offer a target specificity ensuring prolonged protection against genitourinary infections.

However, little is known about microbial communities of reproductive tract of animals and aberrations or dysbiosis in cow and buffalo leading to infertility. The females unable to conceive and calving are then abandoned which pose a threat to humans by causing fatal accidents and spreading parasites and zoonotic pathogens through urine, uterine discharge, and defecation.

The information is sparse on microbiota of reproductive tract microbes and their role in reproductive health and infertility in animals (Durso et al. 2015). Culture-dependent microbial analysis and 16S rRNA sequencing of cow and ewe ectocervicovaginal lavages has revealed a large difference in their vaginal microbial composition (Swartz et al. 2014). Similar reports are available from analysis of Nellore cattle uterine metagenome (Laguardia-Nascimento et al. 2015). Antimicrobial peptides (AMPs) and bacteriocins which act via membrane active mechanisms are widely used in food industries, feed industry and also be used in personal care products, surmounting the pathogens (Ong et al. 2014; Juturu and Wu 2018). As genitourinary tract microbiota is least explored, it is important to study the reproductive ecosystem of livestock species to understand microbial causes and cure of infertility. The bioengineered probiotics producing high titers of AMPs could enhance benefits of probiotics as well as antimicrobial peptides vis-a-vis their role in reviving reproductive health of animals.

Effective public health research and awareness requires a comprehensive and thorough understanding of viruses that are at risk of transmission to humans. Vaccines, antibiotics, antibodies, and antibiotics–antibody conjugates are used to prevent animals against infections.

Edible vaccines offer advantages in animals. Oral delivery of antigens by means of recombinant probiotics, such as those expressing dendritic cell (DC)-targeting peptides, fused with virus antigens is expected to confer protection in animals against viral infections (Wang et al. 2017).

Probiotic lactic acid bacteria, especially lactobacilli and lactococci, in view of their status as safe, and natural presence in humans, and animals including birds and insects are opted to express antigens of viruses of porcine and poultry species to produce cytokines and antibodies, for use as oral vaccines.

A recombinant Lactobacillus plantarum , named L. plantarum (NC8-pSIP409-pgsA-S-DCpep), expressing spike (S) protein originating from TGEV fused with DCpep enhanced MHC-II+CD80+ B cells, and CD3+, CD4+ T cells of ileal lamina propria with simultaneous increase in levels of secretory IgA in feces, and IgG in serum shows that recombinant bacterium is suitable as oral vaccine against the virus (Jin et al. 2018). In another study, 3M2e-HA2 influenza virus proteins were made to express in L. plantarum . The experimental chicks immunized with N/pgsA’-3M2e-HA2, exhibited characteristic humoral, and T cell-mediated immune response against avian influenza virus. The study is emphasized as a novel approach and effective vaccine to promote mucosal immunity (Yang et al. 2018a, b).

Development of novel antibiotics to combat drug-resistant pathogens is slow compared to rise of drug resistance. Recombinant microbes are the emerging and futuristic candidates of nutrition and health management. The bioengineered microorganisms are now making their way to improve nutrient utilization, alleviate forage toxicity, and protect animals against pathogens.

It is a time for new prescription against pathogens and metabolic diseases. A broader approach to address bacterial infection is needed as new pathogens are emerging with resistance to conventional antibiotics. A combined therapy comprising of antimicrobial property, immunomodulation, and anticancer effects of bioengineered probiotics could boost the host immune system.

Engineered probiotics that are safer upon administering or feeding should be prioritized. However, the recombinant microorganisms raise certain safety concerns. The likely probiotic-mediated induction of immune response should be carefully examined. It is likely that overproduction of AMPs by recombinant probiotics may deter the normal gut bacteria that are otherwise essential to wellbeing of the host. It is necessary to prevent proliferation of genetically modified microorganisms in environment when they come out in feces and prevent transfer of transgenes into environmental or pathogenic microorganisms. Key issues, such as strain characterization, quality control, dose optimization, lateral gene transfer from recombinant probiotics to normal microflora, should be embarked upon.

Exploiting microbiota is increasingly a big business. As recombinant probiotics may rebuild microbiota and restore the health with efficiency and site-specificity, the challenges and key problems associated with their use should be thoroughly investigated to enhance their applications in animals serving as part of human food chain. The research to discover normal microbiota and developing alternative microbial therapeutics should be prioritized. The therapies require a critical evaluation before being recommended for human applications.