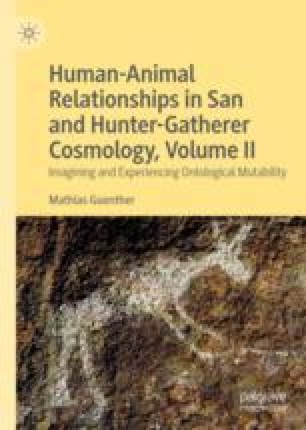 San animistic cosmology, in terms of the New Animism paradigm of relational ontology, is considered cross-culturally by comparing “(S)animism” to other animisms, of other preindustrial peoples, the San’s Bantu-speaking neighbors the one and the Eastern Arctic Inuit the other. The two sets of people and cultures focused on in this comparative exercise are linked to the San in significant ways, one in terms of geographic contiguity and the other in terms of cultural similarity. The first, neighboring Bantu-speakers with whom some San groups have had close and long-standing contact and whose culture contains mytho-magical notions and practices about animal hybridity and transformation, points to inter-acculturative influences. The second is another hunter-gatherer people who, while located in another, far-away region and climate zone of the world, have in common with the San—and hunter-gatherers—a number of cultural-ecological aspects of cosmology and ontology, enough of them as to make such a comparison meaningful. A third non-San cosmology to be considered in this comparative analysis is the Western one which, notwithstanding its dichotomist, anthrocentric Cartesian and Christian intellectual heritage, contains animistic—relational-ontological—elements, especially its recent “ontological turn” toward a “post”- or “trans”-humanist perspective. The perspective has yielded thoughts and insights that resonate with and amplify San cosmology and ontology, and that of other preindustrial hunting people, whose own insights, in turn, would amplify those found in Western culture.

In the earliest times, when both people and animals lived on earth, a person could become an animal if he wanted to, and an animal could become a human being. Sometimes they were people and sometimes animals and there was no difference. All spoke the same language. That was the time when words were like magic.

A special class of shamans … are the so-called bear doctors, shamans who have received power from grizzly bears, often by being taken into the abode of those animal – which appear there in human form – and who after their return to mankind possess many of the qualities of the grizzly bear, … In some regions, as among the Pomo and Yuki, the bear shaman was not thought as elsewhere to actually become a bear, but to remain a man who clothed himself in the skin of a bear to his complete disguisement, and by his malevolence, rapidity, fierceness and resistance to wound be capable of inflicting greater injury than a true bear. Whether any bear shaman actually attempted to disguise themselves in this way to accomplish their ends is doubtful. It is certain that all the members of some tribes believed it to be in their power.

The forest is a conscious ecosystem from which they [Amazonian hunters] are ontologically inseparable … A ritual ecology is in place, one in which man’s ritual must conform to the relationship between the species to maintain an ideal balance between the beings that inhabit and constitute the forest.

When killing an elk or a bear, I sometimes feel that I have killed someone human. But one must banish such thoughts or one would go mad from shame.

This said, the man begun to disappear.

By slow degrees, and ended in a deer.

A rising horn on either bro he wears,

And stretches out his neck, and pricks his ears;

Rough is his skin, with sudden hairs o’er-grown,

His bosom pants with fears before unknown:

Transformed at length he flies away in haste,

And wonders why he flies away so fast.

But as by chance, within a neighb’ring brook,

He saw his branching horns and alter’d look.

He try’d to speak, but only gave a groan;

And as he wept, within the watry glass.

He saw the big round drops, with silent pace,

What should he do? Or seek his old abodes,

Or herd among the deer, and sculk in woods!

Here shame dissuades him, there his fear prevails,

And each by turns his asking heart assails.

Actaeon’s transformation into a stag.

I have made my burrow habitable and it has shaped up well … What’s best about my burrow is its quietness. Admittedly, it can be misleading. Suddenly the quiet can be interrupted and it’s all over. For the time being it still surrounds me. I can spend hours moving through my passages and all I hear is the rustling of some small animal, which I put an end to between my teeth, or the some tickling of the soil, that signals the necessity for some sort of repair work. Other than that it’s all quiet. The forest air blows in, both warm and cool. Sometimes I stretch out and I turn around in the passage, filled all through with contentment. It is good in one’s advancing years to have such a burrow, have a roof over your head as fall advances.