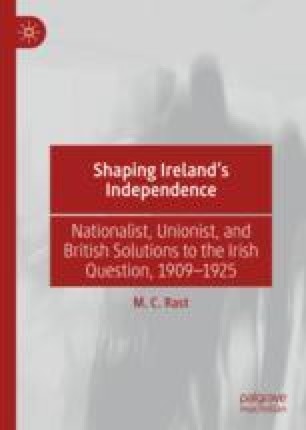 This chapter examines how, by 1913, the idea of excluding Ulster from home rule dominated discussions of Ireland’s future. Unionists insisted only this would avert civil war, but Rast argues they did not really want a settlement and assumed Irish nationalists would block exclusion, forcing the general election that was their real goal. They did not anticipate that the Liberal Cabinet would advance exclusion by themselves. Irish nationalist leaders were willing to make concessions to Ulster unionists, consenting to temporary exclusion believing this would safeguard home rule. Cabinet members ceased consulting Irish nationalists as their concessions to unionists expanded. The First World War intervened before Irish division or civil war, but tensions were held in place: unionists feared future self-government and its delay frustrated nationalists.