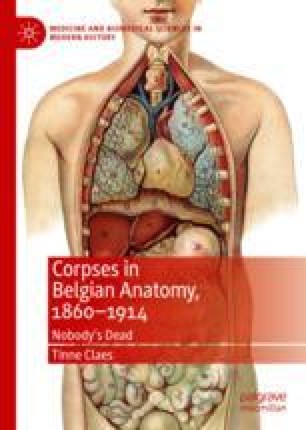 Under the Scalpel: Dividing the Body

This chapter shows how medical faculties secured the supply of cadavers when it became more difficult to claim the bodies of the poor for dissection in the late nineteenth century. Claes shows that medical faculties solved the lack of bodies for education through a redefinition of the autopsy. The autopsy was a compromise, accommodating educational, social and scientific changes. By distinguishing autopsy from dissection, medical faculties in Belgium regained access to the bodies of the poor—at least on the inside. They were able to convince city councils that autopsies could happen without consent, as the intervention was invisible for the untrained eye. At the same time, the new emphasis on autopsies echoed the shifting ambitions of universities and hospitals, which increasingly prioritised science over education.

Cite this chapter as:
Claes T. (2019) Under the Scalpel: Dividing the Body. In: Corpses in Belgian Anatomy, 1860–1914. Medicine and Biomedical Sciences in Modern History. Palgrave Macmillan, Cham