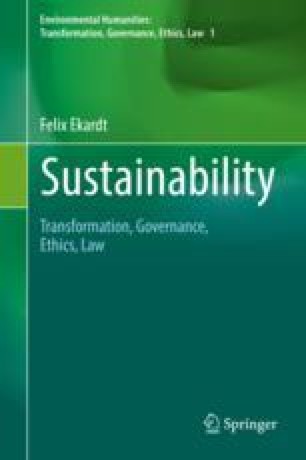 Politics and Governance of Sustainability – On Climate, Energy, Agriculture and Conservation Policy Instruments with a New Focus

On the basis of the normative theory of sustainability just laid out, effective implementation measures can be identified. In a first step, a number of promising starting points can be identified for individual and entrepreneurial action as well as for educational measures. Education, voluntary corporate social responsibility (CSR) and consumer engagement can play a role, but they cannot eliminate the need to contain capitalist economic activity and daily life through effective policy instruments, especially with regard to sustainability. Knowledge and intrinsic (self-interested or value-driven) motivation alone cannot trigger the necessary transformation. At the level of the individual person or company, it is also not possible prescribe sufficiently precise what each of the actors has to achieve individually. In addition, there are some general governance problems with regard to addressing single actions (such as shifting effects and rebound effects: see below).

At the political level, there has been an impressive collection of sustainability programmes and declarations on an international, EU and national level to date, although this collection is conflicting with the still large ecological footprint per capita. This also applies to the much-discussed stipulations in the UN Framework Convention on Climate Change (UNFCCC), in the Kyoto Protocol and now in the Paris Agreement, which sets a very ambitious temperature limit, but falls far short in all details of establishing instruments of implementation. The previous sustainability governance in terms of command-and-control law, information law, subsidy law, and procurement law offers a diverse picture which, overall, is not very effective measured against the ambitious (!) objectives (and only this way the effectiveness of instruments can be analysed). Keywords for severe governance problems especially with regard to sustainability include direct and indirect rebound effects (which also include wealth effects), resource-related, sectoral, and spatial shifting effects, lack of rigour, enforcement problems and problems of depictability. These governance problems can only be solved if sustainability issues are consistently understood as (mostly) quantity problems and which require ambitious quantity limits. Thus, those need to be established as core instrument of sustainability policy.

The most promising approach of quantity governance in terms of sustainability would be a cap (and trade) approach or a similarly structured levies on central noxious agents. Given this is construed in a substantially and geographically broad way and with a clear orientation towards ambitious goals, the above-mentioned governance problems can be solved. Furthermore, the diagnosed motivational situations of citizens, companies and politicians (self-interest, conceptions or normality, etc.) can be adequately addressed – in a freedom- and democracy-friendly manner. Questions such as “certificate markets or levies”, “overall market or submarkets” or “costefficiency” are mostly overestimated, as is the question of which instruments should be labelled as economic or regulatory. The idea that the controlling effect of prices is only limited (allegedly due to price elasticity of demand) is based on several false assumptions. The existing EU emissions trading system (ETS) in the climate sector, however, solves almost none of the problems just listed, and neither do various tax approaches.

The key instrument for climate protection as well as for other environmental problems would be a strict cap on fossil fuels in line with the temperature limit in Article 2 para. 1 PA. This could be achieved by means of a completely revised emissions trading scheme that integrates all fossil fuels (instead of merely some industrial sectors) and commits to strict caps and closed loopholes. This could be started by the EU and other willing states and thus gradually removing fossil fuels from the market within two decades. For individual citizens and businesses, this would result in increasing and soon relatively massive price incentives in favour of more efficiency, more renewable resources and, as is mostly neglected, frugality (whose necessity due to the very ambitious target is typically ignored in the economic discourse). The approach could gradually be extended to a global scale. The revenues of the system would essentially contribute to financing mitigation and adaptation in the participating countries of the Global South. An important complementary instrument are border adjustments towards non-willing states for imports and exports. Shifting effects for emissions or resource consumption (and competitive disadvantages) are thus avoided, and pressure is exerted on other states to participate in the system. At the same time, the economic viability of an effective sustainability policy can be demonstrated, ultimately paving the way for later global agreements. A quantity-controlling approach can be even advantageous from the point of view of social distribution, especially on a global scale, but also with regard to social inequalities within industrialised countries. It addresses both the long-term fatal social impacts of climate change and resource depletion as well as poverty reduction in developing countries. In addition, the model favours the establishment of administrative, educational and welfare institutions in developing countries, which will probably lead to slower population growth (which, like demographic change in general, is overinflated as a cause of problems and too little recognised as their consequence). Furthermore, in the North and South, permanently available and affordable energy is secured, a global race to the bottom in terms of eco-social standards is avoided, and positive effects on the labour market are also likely. In addition, compensation on a global scale and to a lesser extent also for the socially weaker in the industrialised countries is conceivable from the revenues of a quantity governance system. Global concepts for resource and sink problems can thus be linked to combatting poverty.

If an integrated solution is to be sought for various environmental problems (climate, biodiversity, nitrogen, phosphorus, soils, water), a rapid phasing-out of fossil fuels is key. But a cap for livestock farming is similarly important. In connection with capping fossil fuels, this would trigger far-reaching changes also in agriculture, e.g. in the direction of organic farming, pasture farming and significantly lower consumption of animal food, which would in total greatly relieve biodiversity, soils, water, nitrogen (and phosphorus) cycles and public health. Other pricing instruments are also conceivable.

In addition, in order to avoid hot spot problems and path dependencies, a number of supplementary command-and-control rules and prohibitions remain important in the area of sustainability, for example as additional tool to save biodiversity. This would, however, be more selective and, moreover, would involve stricter and more stringent regulatory law in terms of content and enforcement than is currently the case. The same applies to informational and planning instruments. In contrast, direct pricing of control variables that are difficult to grasp, such as biodiversity, is not very effective.

A sustainability policy that is pursued by a group of willing states has to assert itself against a global, borderless world economy. Cross-border free trade in particular has typical social and ecological defects and calls for regulatory containment of capitalist economic activity. This is true not only in terms of sustainability (in order to avoid shifting effects) but also in terms of democracy which is put under pressure by globalisation minimising the decisive power of domestic parliaments (legally and factually). The current state of establishing global liberal-democratic institutions is ethically and legally only partially compatible with the justification of a universal, global and intertemporal liberal-democratic law and ethics. At least, a sustainability pioneering role of some states is not prohibited under international trade law, including border adjustments for imports and exports. All in all, a categorical rejection of free market systems remains unconvincing even considering the concept of free trade.