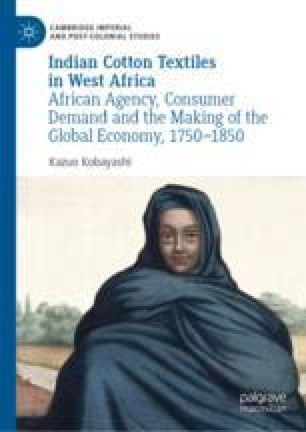 This chapter probes the transition from the transatlantic slave trade to ‘legitimate’ commerce and whether this eliminated the south-south linkage of Indian textiles. It offers an overview of the slave trade from 1751 to 1850, and that of jihad in West Africa. The discussion then focuses on major staples from West Africa in the early nineteenth century: palm oil, gum arabic and groundnuts. It moves on to imports into West Africa: textiles, both English and Indian; and cowries. It shows that although English textiles were increasingly imported to most of West Africa, Senegal continued to import Indian textiles rather than European goods. The chapter indicates that the development of the palm oil trade revived and even reinforced the south-south connection of cowries.