The Art and Science of Machine Intelligence 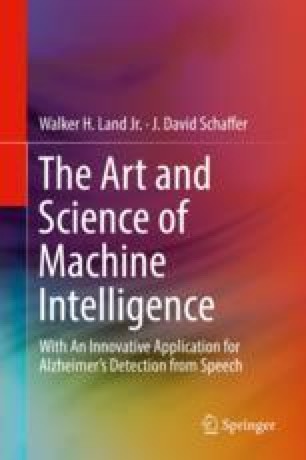 In this chapter, we show how the methods described in previous chapters can be effectively combined. The application is the supervised learning of an accurate classifier. An example is characterized by a vector of features, and one presumes more features than needed, so some form of feature subset selection is needed. We describe what is often called a “wrapper approach” in which the feature subset selection algorithm (CHC in this case) repeatedly calls a leaning classifier system (SVM in this case) to compute an evaluation of each proffered feature set. We then describe an approach to data normalization that allows new cases that need to be classified in future, to have feature values outside the range observed in the training set. The two measures of desired performance, classification accuracy and subset size, are shown both evolving in the desired directions. We introduce an extension of the conventional area under the ROC curve metric (Sect.  3.7) that has desirable properties for tasks of this type. Then we apply this hybrid approach to our task of discovering a speech-based diagnostic test for dementia including aspects of the cross-validation experimental design and schemes for picking the winning feature sets. Finally, we show how the multiple discovered feature sets may be effectively combined using the GRNN oracle. This revealed some cases that we call trouble-makers, discussed in Chap.  3. These provide examples for the new method presented in Chap.  9 that allows a classifier system to know what it doesn’t know.

Area under the ROC curve