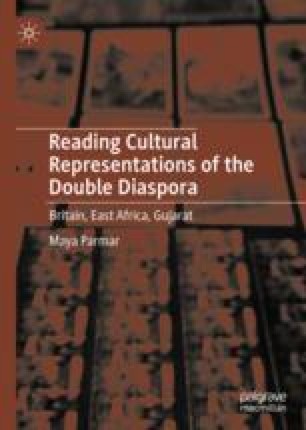 Parmar explores the contemporary digital turn in cultural studies, via first an investigation of the cluster of 2017 UK events marking the 70th anniversary of Indian independence, alongside, second, scrutiny of the digital social network Facebook and its highly popular ‘RecommendAsian’ group, on which forms of online identity are articulated. Parmar demonstrates how the 2017 UK anniversary programme was deployed as a dual tool to reinforce notions of Indian national identity, as well as expand that remit around a conceptualisation of ‘diversity’. Conspicuously projected into the British public imagination, she problematises this construction of an imagined Indian national identity. Parmar then scrutinises the interface between the British diaspora, through ‘RecommendAsian’, and these narratives of Indian national identity, returning ultimately to an exploration of diasporic identity. She explores online participation as a form of autobiography, where there is a sustained construction of subjectivity, which concurrently shapes the collective performance of ‘Asianness’.