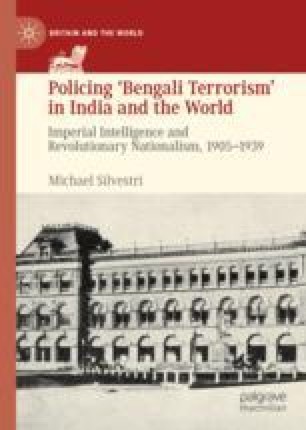 The introduction surveys how Bengal became the focus both of British fears regarding Indian terrorism and of concerted police and intelligence efforts to eradicate anticolonial revolutionary activity in the years between the 1905 Partition of Bengal and the outbreak of the Second World War. While recent historians have emphasized the important role of intelligence during the era of post-Second World War decolonization, the extensive intelligence apparatus directed against the Bengali revolutionaries suggests that the roots of imperial intelligence as a sustained practice lie in the interwar era. The book explores the emergence of modern police intelligence in colonial India and how in turn the policing of revolutionaries in Bengal was connected to and influenced police and intelligence work within the wider British Empire. Intelligence experience acquired in Bengal contributed to the construction of a British “intelligence culture” which after the Second World War was disseminated throughout the empire in a new and more intensified fashion. The focus throughout is on the British intelligence officers, Indian officers, and informants and revolutionaries and their allies, ranging from elite anticolonial activists to subaltern maritime workers.