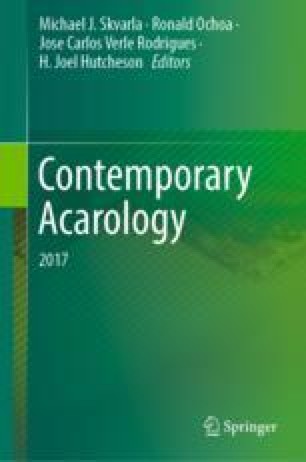 Public Health Command-Central is responsible for entomological surveys, vector surveillance programs, and diagnostic testing for vector-borne pathogens for the army throughout a 20 state region. This responsibility affords civilian entomologists and military entomology officers assigned to PHC-Central the opportunity to conduct field studies for emerging pathogens, range expansions of medically important arthropods, and novel mitigation and control strategies. Two on-going studies at Joint Base San Antonio are diagnostic testing of mite parasites of reduviid bugs for Trypanosoma cruzi, the causative agent of Chagas disease, and evaluating trapping methods for soft ticks with the long-term goal of determining their potential role in vectoring the tick-borne relapsing fever historically known as “Camp Bullis Fever”.

We would like to thank Dr. Job Lopez for his guidance on field soft tick surveillance methods for PHC-C staff in 2016 and his continued support for soft tick work at JBSA. We also would like to thank Dr. Leo Cropper, director Air Force Trainee Health for his continued support and approval of our field studies on Air Force Installations. We also want to thank the vector borne disease program staff at Harris County for their work in kissing bug and parasitic mite collection in 2016–2017. We are also grateful for the support of Public Health Command-Central allowing us time to conduct field studies of military medical importance on JBSA and within our region.