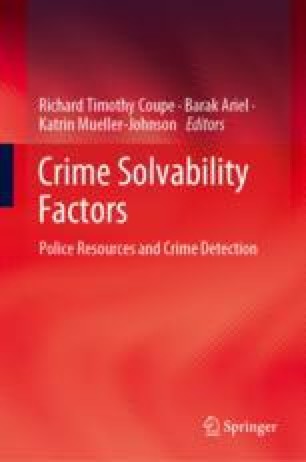 This chapter examines faith hate offences in London, UK. It is based on Metropolitan Police Service records of 4723 Islamophobic and 3967 anti-Semitic assaults and criminal damage and public order offences that occurred between January 2000 and April 2017. Only 22% of Islamophobic and 15% of anti-Semitic offences were detected, with more assaults than public order offences, and more public order offences than criminal damage offences, being detected. Jewish victims experienced more criminal damage offences and fewer assaults and public order offences than Muslim victims, and this helps explain why fewer anti-Semitic offences were solved. Significant solvability factors included police witnessing offences, offences involving police officers, drivers or security workers, incidents with more eyewitnesses, fewer reporting delays and residential venues. Other factors concern the ways in which offences were policed, with local borough investigating officers and investigations by police constables rather than more senior officers boosting detections. Solvability factors and detections differed for both faith-type and offence-type subgroups. There was a higher level of statistical explanation of detection outcomes for anti-Semitic than Islamophobic assaults and criminal damage, though the explanation of public order offences was lower for Jewish than Muslim victims. By comparing the significant solvability factors using binary logistic regression analyses, it is possible to identify and predict those incidents that are more solvable, and which may therefore be solved more cost-effectively, and the least solvable incidents—which commonly constitute up to half of all incidents—with poorer detection odds, which may only be solved with considerably more resources per case. This provides a basis for decisions about prioritisation and the improved targeting of resources. Whereas Islamophobic crimes were distributed widely across the 32 London boroughs, anti-Semitic offences were concentrated in nine boroughs with 44% occurring in the two boroughs of Hackney and Barnet, where there are large orthodox Jewish communities. Offence solvability varies spatially, and this helps explain geographical variations in detection rates, which varied more for Jewish than Muslim victims. There was no significant relationship between borough detection rates for Islamophobic and anti-Semitic crimes.