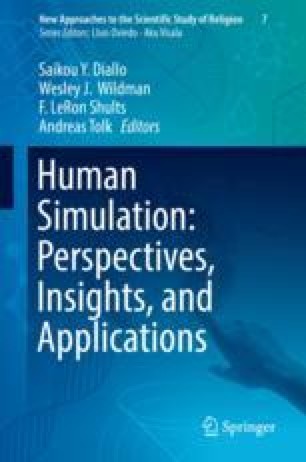 Modeling Models: Documentary Filmmaking as a Purposeful Abstraction of the Modeling Process

Chapter
Part of the New Approaches to the Scientific Study of Religion book series (NASR, volume 7)

This chapter offers a perspective on a how a documentary filmmaker interprets the enterprise of modeling religion for an educated lay public audience. From a methodological standpoint, documenting such a project in film introduces a range of useful questions about the nature of film as data and the nature of film as model. Documentary filmmaking is an interdisciplinary endeavor that demands ethnographic skill, technological acumen and narrative sensitivities—including the ability to balance priorities distinctly different from those of an academic research project.

Inasmuch as a computer model is a purposeful abstraction of reality, an ethnographic documentary film series about the process of building computer models and simulations about religion is itself a purposeful abstraction of this creative process. Taking into account the receptive capacities of an audience more generalized than typical academic journal readers, the filmmaker is required to abstract the practice of modeling in a way that accurately reflects this complicated undertaking in a way that is not too complex for viewers—and that is engaging on a narrative level—but still pursues questions about the procedures and consequences of the Simulating Religion Project. The documentary filmmaker, like the computer simulators themselves, must find a “sweet spot” in model-building that allows for cognitive control of the model, or clarity in image and narrative, while pushing forward a set of specific research questions.

However, the “question” pursued in a documentary miniseries about the Simulating Religion Project is not experimental but rather narrative. This shift in priority—from the investigative to the descriptive—bears greatly on the “data” collected for the “research” embarked upon in documentary film. Data collection with an eye toward narrative also biases the filmmaker to seek universal meanings and concerns throughout the process of filming and interviewing participating researchers. While the Simulating Religion Project might ‘simply’ ask “Can we simulate religion?” Simulating Religion the documentary film seeks a more gripping, universal set of meanings for the project, such as, “Can models of religion predict—and help us stop—religious terrorism?”

The essence of narrative is conflict and tension, but in a research environment the presence of these factors would be not only unprofessional but detrimental to the success of the project. Therefore the filmmaker is tasked with a series of challenges that may not be perfectly in line with the goals of the research project itself. The filmmaker must balance accurate documenting with story construction, and “teach” the process of modeling religion to the audience with a pedagogy that is comprehensible and inviting, yet conveys enough complexity to demonstrate the ambition of the Simulating Religion Project. Despite these challenges, the accessibility and holistic capacity of documentary film to present a “bird’s eye view” of the project over a three-year span in a language that can potentially engage a broad range of viewers make it a valuable tool for communicating complicated research to worlds beyond specialized academic fields.