Education for Decoloniality and Decolonisation in Africa 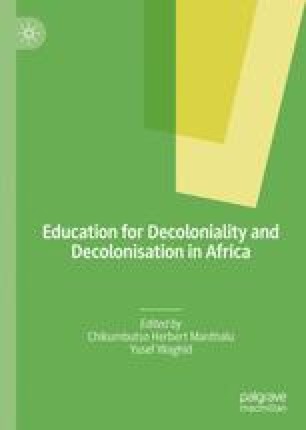 Examining an Education for Decoloniality Through a Senian Notion of Democratic Education: Towards Cultivating Social Justice in Higher Education

In this chapter, employing a Senian notion of virtues of democracy, Zayd Waghid argues that decolonial education ought to aim at achieving a conscious individual and social shedding off of an often-unexamined neo-colonial mentality that characterises even decoloniality endeavours. Zayd Waghid argues that a Senian account of democracy, when embedded in education for decoloniality, expects of students to identify and challenge power hierarchies between students and the university and, more importantly, oppressive power hierarchies among students themselves that restrict them from exercising their basic political and liberal rights. Such neo-colonial tendencies among students mostly manifest through coercion to adopt essentialist decolonialisation positions that require an almost entire dismissal of one perspective of knowledge, replacing it with another largely ethnocentric one. Ideal education for decolonisation, as Zayd Waghid contends, ought to be about students acting through a sense of recognition of and respect for the rights of the culturally diverse student community and the wider society where members have diverse values. As such, the author posits that education for decoloniality should be about students conscientising and sharing perspectives with diverse others in a context characterised by mutual respect, harmony and accountability in order to achieve social transformation. Decolonisation demands of social justice, Zayd Waghid purports, must not be conceived in narrow forms of decoloniality, grounded in forms of solidarity such as cultural and racial identities that are immune to internal and external assessment. Such decoloniality is ironically neo-colonialist. Zayd Waghid’s position is that education for decoloniality must incessantly conscientise students to identify and challenge a lack of transparency and accountability of dominant student groups vigilantly, irrespective of the nature of the basis of solidarity for such groups. Such students will have an awareness of the internal and external unfreedoms of their society that inhibit the full capabilities for human flourishing of all members of society. In the absence of self-reflexivity and practical reason, one could be narrow and essentialist in one’s demands, ultimately not only disabling the capabilities of cultural and racial others to flourish, but such narrowness also disables one from flourishing in other spheres of ones’ life, such as economic, whose prospects are adversely affected by the demands of the narrowness.