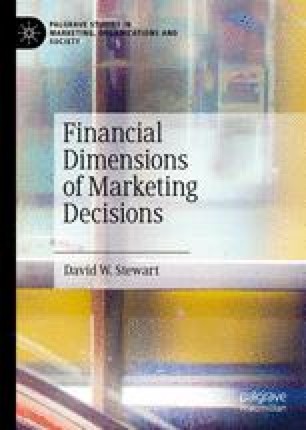 The Financial Imperative of Marketing

Appendix: A Primer on Discount Rates

More generally, the discount rate is the firm’s “cost of capital” or cost to obtain and use money. The cost to obtain and use someone else’s money can be the interest paid for a loan or the return expected by shareholders, or any of numerous other sources of funds. When the cost of the money across all of the sources is weighted to reflect the proportion of total funds from each source and then averaged, the firm obtains its weighted average cost of capital.

In reality, the definition of the cost of capital and associated discount rate can be even more complex because another way to think about the cost of capital is in terms of rate of return a firm might expect from other ways of using its own money. For example, Amazon has rarely ever reported a profit because its strategy is to put all earnings back into growing the company. It would be naive and imprudent for Amazon to set its discount rate at zero because it is using its own money. Rather, the discount rate reflects the return Amazon thinks it can generally obtain from its investments in future growth. At minimum, it could just put its money in the bank and draw some interest. In mid-2018, it could buy ten-year U.S. Treasury bonds, guaranteed by the U.S. government and obtain a guaranteed rate of return of about a 2.5% return for ten years. Because this return is guaranteed by the government it is often referred to as the “risk-free rate,” that is, the firm has to take virtually no risk and not even undertake much work to obtain this rate.

Well-managed companies expect to be able to earn more than the risk-free rate. Firms generally have some idea of what they currently earn on their investments and what their average return is. Therefore, when they think about the cost of money, they often think in terms of the return the same funds could earn if invested in other ways, or, for convenience, an average return on investment. This is called the opportunity cost of capital because using capital in one way precludes its use to pursue other opportunities. Many firms use the perceived opportunity cost of capital as the discount rate.

Discount rates are often standard across a company and frequently do not change much over time. This makes things simple and computations using it very easy. However, as will be explored in Chap.  9, different activities in a firm—different products, different technologies, different market—often differ in how risky they are. Return and the discount rate should reflect this risk such that the riskier projects should yield more than less risky projects to compensate for the risk. Chapter  9 will explore this risk-return relationship in greater detail.

Because firms differ, their costs of capital, and hence discount rates, should differ. In larger firms, the discount rates among divisions and business units will often differ as well. An unproven start-up firm, which represents a risky venture will have a higher cost of capital and associated discount rate than a very mature company with stable cash flows. Aside from these rather general relationships between risk and return, and the level of interest rates in general, there is no specific formula for determining the “right” discount rate. Establishing the discount rate and adjusting it to reflect relative risk is a subjective exercise. Marketers need to understand that firms recognize the costs of capital and incorporate these costs in their planning. The discount rate is the way this is done in practice.