Logic and General Theory of Science 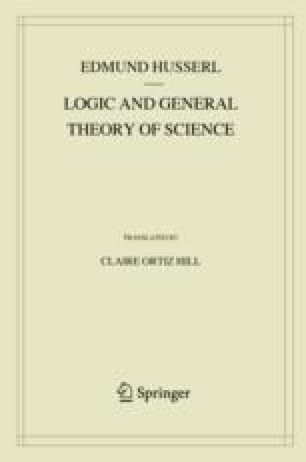 Logic and General Theory of Science pp 29-79 | Cite as

To start with, I shall briefly sketch the outline for our next series of reflections. I shall describe in advance the milestones along the path to be travelled, each one of which at the same time indicates an important subgoal. The orientation we have adopted up until now−and naturally have adopted because we are beginners−has been toward cognitive acts, <toward> what is somehow contained in “knowing” in the broadest sense of the word: judging asserting as considering-true, also considering-possible and considering-probable, questioning, and doubting. All that, I say, belongs here, as well as the varied forms of substantiations with the intuiting experiences that play an essential role here, thus experiencing as perceiving, remembering, and so on, grasping the sub-concept, inferring. For the orientation we have adopted, cognitive acts do not, however, come into consideration as psychological facts, but in an ideal connection. If we now understand the logical approach as an approach to ideal norm-setting for cognitive acts from <the> standpoint of correctness and incorrectness, then we are led to a normative logic in the sense of a noetic theory of justification, of a theory of justification of knowing. We shall not, however, consider this logic more closely now, but rather completely postpone that for the time being. We shall rather turn our gaze, as it were, in the opposite direction. Instead of contemplating the forms of knowing in pure generality from the standpoint of correctness, we shall rather turn to consider what is known as such. I call this orientation noematic. The word knowledge is ambiguous. On one occasion, it means knowing, on another, what is known, as it is known. In just the same way, as I shall discuss in greater detail, the word statement, judgment, is ambiguous: on one occasion, stating, judging, predicating, on another, the statement, the judgment, the predication, the proposition.