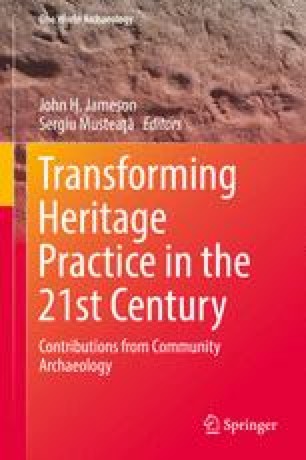 Reaching Out: The Participatory Culture Model and Current Approaches to the Creation of New Archaeological Knowledge with Local Communities

Chapter
Part of the One World Archaeology book series (WORLDARCH)

The history of the construction of archaeological knowledge charts the development of amateur observers and collectors of curiosities through to the late eighteenth- and early nineteenth-century antiquarians en plein air leading on to the development of archaeology as a profession. Into the twenty-first century not only has archaeology developed as a scientific discipline but so too has the world of communication, which has changed how we live economically, politically and socially, all of which informs our concept of the construction of history and thereby archaeological knowledge.

At English Heritage, we conserve and maintain historic sites and monuments which are in guardianship for the nation on behalf of the government. The primary focus is to look after the sites and their collections in perpetuity, but we also want to reach out to the public to help them appreciate the significance of these places and events that took place in them. To do this we need to make them accessible in different ways. Engaging with millions of visitors presents a challenge but is successful mostly where there is participation by both amateurs and professionals alike. At Stonehenge, for example, visitors, led by volunteers, are invited to visit reconstructed Neolithic houses to get a hands-on experience of the Neolithic while experiencing experimental archaeology.

This chapter, which is based on a contribution to a session at WAC 7 in Jordan on Archaeology as Public: Consumers, Producers, or Interactive Partners? Toward Multivocality in Participatory Archaeology, addresses the development of the relationship of professionals and amateurs in the heritage world today and will consider through case studies from museums, heritage sites and field archaeology, the construction and dissemination of archaeological knowledge.

The author is grateful to the many volunteers she has worked with over many years particularly the Guernsey Museum Archaeology Group. Also, to colleagues at English Heritage for sharing information and permission to use images. I wish to thank all the volunteers who contribute their time and energy to bringing the past to life for all the visitors to Stonehenge. I also wish to thank Professor Tim Darvill, Martin Allfrey and other colleagues for permission to describe the Human Henge project. All the opinions expressed are the author’s own and not those of English Heritage.