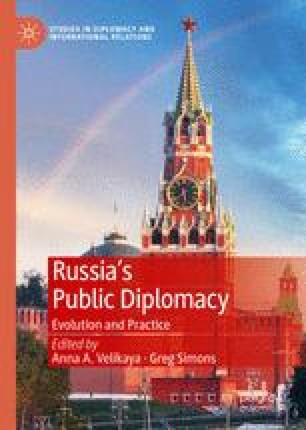 This chapter presents how public diplomacy (PD) is conceptualised and operationalised from a Russian perspective, which differs from the Western one. The chapter states that the practice and terminology of PD are different in Russia, and it is not the same as its Western alternatives, as it includes the elements of engagement, but it does not include the elements of countering foreign propaganda/terrorist threats, which is supposed to be the part of the strategic communications narrative. Both Russia and Post-Soviet countries have a unique approach towards synonymous term of public diplomacy—humanitarian cooperation. Through its public diplomacy, Russia promotes the message that the nation state is the only reliable guarantor of international peace and stable world order and that interests prevail over values. It introduces the thesis that Russian public diplomacy is state-centric and consists of the mainly state-based PD initiatives.

It reveals origins of Russian Imperial and Soviet public diplomacy. It covers reasons that have led towards establishing new engagement mechanisms in the early 2000s.

It gives analysis of weaknesses and strengths of Russian public diplomacy in terms of its goals, actors and instruments; target audience; and evaluation of its efficiency in the regions of the top foreign policy priority.

It shows the importance of international dialogue and empathy during times of confrontation and prospects for the future research.