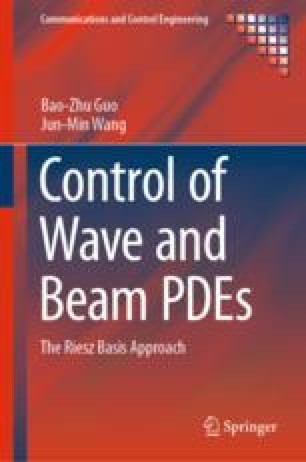 This chapter provides a panoramic view on the comparison method. It discusses systematically how the comparison method is used to derive the Riesz basis generation for systems described by partial differential equations. A basic assumption for comparison method to be working is that the feedback can be considered as a perturbation of the system itself, that is, the order of the feedback is lower than the order of original system, which is clear from the spectrum or transfer function point of view. It starts with a constant beam equation with collocated boundary feedback control, and then the beam equation with variable coefficients. A beam equation with span pointwise control is presented to show its Riesz basis and exponential stability. A one-dimensional thermoelastic system is fully discussed. The Riesz basis property has been developed for these systems, which implies particularly that the dynamics of the system is completely determined by vibration frequencies. Mathematically, all the operators are of compact resolvent. In the last section, however, an example of the Boltzmann integral model is presented where the resolvent is not compact and the continuous spectrum exists. Two different types of Boltzmann integrals for the dynamics of vibrating systems are discussed and the Riesz basis property has been developed.

We point out that although some systems discussed in this chapter can be cast into the abstract framework of Sect.  2.9, we would rather have a direct spectral analysis to demonstrate the comparison method. Part of the reason is that obtaining the spectral distribution for free (without feedback) systems is almost the same difficulty as direct analysis of the spectrum for closed-loop systems. Another possibility is to apply Theorem  2.49 for which we need to show the completeness of the root subspace, which is also not easier than a direct application of the comparison method.