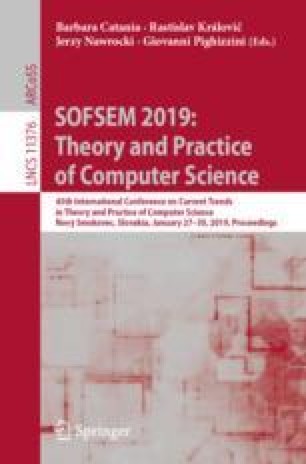 International Conference on Current Trends in Theory and Practice of Informatics

A Hierarchy of Polynomial Kernels

In parameterized algorithmics the process of kernelization is defined as a polynomial time algorithm that transforms the instance of a given problem to an equivalent instance of a size that is limited by a function of the parameter. As, afterwards, this smaller instance can then be solved to find an answer to the original question, kernelization is often presented as a form of preprocessing. A natural generalization of kernelization is the process that allows for a number of smaller instances to be produced to provide an answer to the original problem, possibly also using negation. This generalization is called Turing kernelization. Immediately, questions of equivalence occur or, when is one form possible and not the other. These have been long standing open problems in parameterized complexity. In the present paper, we answer many of these. In particular we show that Turing kernelizations differ not only from regular kernelization, but also from intermediate forms as truth-table kernelizations. We achieve absolute results by diagonalizations and also results on natural problems depending on widely accepted complexity theoretic assumptions. In particular, we improve on known lower bounds for the kernel size of compositional problems using these assumptions.

Given any decidable set V, we can define
Open image in new window

We construct V by diagonalizing against psize kernelization algorithms. To do this, we consider a computable list of TMs such that every machine appears infinitely often. At stage i of the construction we choose n, a power of 2, so that membership in V has not been decided at a previous stage for any strings of length at least \(\log n\). We then run the i-th machine on input \(\texttt {1}\texttt {0}^n\) for \(n^i\) steps. All new oracle queries are answered with ‘no’, all other queries are answered so as to be consistent with previous answers. If the machine at stage i terminates without having queried the oracle for all strings of the form \(\texttt {0}y\) with \(y \in {\{\texttt {0}, \texttt {1}\}}^{\log n}\), we add an unqueried string of this length to V if and only if the machine rejects.

If P is a psize kernelization, then the number of oracle queries it makes on an input \(\texttt {1}x\) is upper-bounded by \(q(\log {|x|})\), for some fixed polynomial q. This is clearly \(o({|x|})\), so for some sufficiently large i and n, P will terminate without having queried all n strings which can determine the correct answer. Thus, our diagonalization procedure will ensure that it terminates with the incorrect answer. On the other hand, the above-mentioned polynomial truth-table kernelization will always query all necessary strings in order to output the correct answer.     \(\square \)

We now construct the set V so that no polynomial truth-table kernelization can solve X(V). Consider a variant of oracle TMs where the oracle can be queried for an arbitrary number of queries at once. Let \(P_1, P_2, \ldots \) be a computable list of all such TMs in which each machine appears infinitely often.