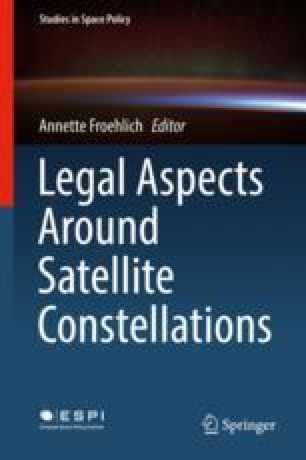 Answering an Orbit Full of Questions: A Proposed Framework to Provide Legal Certainty on the Current and Future State of the Law Regulating Satellite Constellations

The First-Generation Space Law system brought certainty in relation to many types of space activities within the Cold War era. Over and above the five space treaties, several other treaties, guidelines and practices developed to establish order within the domain of satellite-related space activities. These rules and guidelines are divided into hard law and soft law categories, depending on their enforcement status. During this time, the satellite industry was dominated by governments and large private contractors and companies feeding off government projects and monopolising the little space allowed for private operations. However, the New Space era is fast changing the landscape with many new private role players having entered and many still accessing the newly enlarged space market. The speed with which this is taking place is giving rise to many new legal questions that the First-Generation Space Law system simply was not designed to deal with. Accordingly, more is expected from space law to provide certainty, which brings into sharp focus the need for the establishment of a Second-Generation Space Law system in general, but more specifically also for the satellite industry. This study endeavours to create a framework to provide certainty on the current and future state of the law that will allow for the prioritisation of issues to be dealt with as New Space changes the satellite universe.

Cite this chapter as:
de Waal Alberts A. (2019) Answering an Orbit Full of Questions: A Proposed Framework to Provide Legal Certainty on the Current and Future State of the Law Regulating Satellite Constellations. In: Froehlich A. (eds) Legal Aspects Around Satellite Constellations. Studies in Space Policy, vol 19. Springer, Cham. https://doi.org/10.1007/978-3-030-06028-2_7