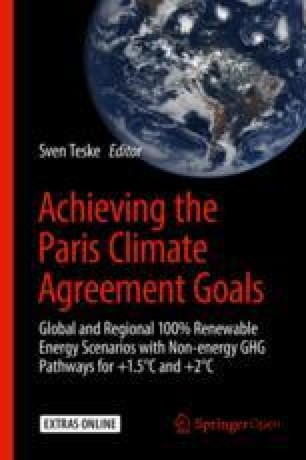 Literature overview of published global and regional renewable energy potential estimates. This section provides definitions for different types of RE potentials and introduces a new category, the economic renewable energy potential in space constrained environments. The potential for utility scale solar and onshore wind in square kilometre and maximum possible installed capacity (in GW) are provided for 75 different regions. The results set the upper limits for the deployment of solar- and wind technologies for the development of the 2.0 °C and 1.5 °C energy pathways.

This chapter provides an overview of various estimates of global renewable energy (RE) potential. It also provides definitions of different types of RE potential and presents mapping results for the spatial RE resource analysis (see Sect. 1.3 in Chap.  3)—[R]E-SPACE. The [R]E-SPACE results provide the upper limit for the deployment of all solar and wind technologies used in the 2.0 °C and 1.5 °C Scenarios.

“ (…) any form of energy from solar, geophysical or biological sources that is replenished by natural processes at a rate that equals or exceeds its rate of use. Renewable energy is obtained from the continuing or repetitive flows of energy occurring in the natural environment and includes low-carbon technologies such as solar energy, hydropower, wind, tide and waves and ocean thermal energy, as well as renewable fuels such as biomass.”

Different types of renewable energy potentials have been identified by the German Advisory Council on Climate Change (WBGU)—World in Transition: Towards Sustainable Energy Systems, Chap.  3, page 44, published in 2003: (WBGU 2003) (Quote):

“Theoretical potential: The theoretical potential identifies the physical upper limit of the energy available from a certain source. For solar energy, for example, this would be the total solar radiation falling on a particular surface. This potential does therefore not take account of any restrictions on utilization, nor is the efficiency of the conversion technologies considered.

Economic potential: This potential identifies the proportion of the technological potential that can be utilized economically, based on economic boundary conditions at a certain time […].

Sustainable potential: This potential of an energy source covers all aspects of sustainability, which usually requires careful consideration and evaluation of different ecological and socio-economic aspects […].” (END Quote)

Theoretical and technical renewable energy potentials versus utilization in 2015

However, the technical potential is only a first indication of the extent to which the resource is available. There are many other limitations, which must be considered. One of the main constraints on deploying renewable energy technologies is the available space, especially in densely populated areas where there are competing claims on land use, such as agriculture and nature conservation, to name just two.

It is neither necessary nor desirable to exploit the entire technical potential. The implementation of renewable energy must respect sustainability criteria to achieve a sound future energy supply. Public acceptance is crucial, especially because the decentralised character of many renewable energy technologies will move systems closer to consumers. Without public acceptance, market expansion will be difficult or even impossible (Teske and Pregger 2015). The energy policy framework in a particular country or region will have a profound impact on the expansion of renewables, in terms of both the economic situation and the social acceptance of renewable energy projects.

The discrepancy between the technical potential for bioenergy and the likely sustainable potential raises some issues that warrant further discussion. Recent analyses put the technical potential for primary bioenergy supply at 100–300 EJ/year. (GEA 2012; Smith et al. 2014). However, the dedicated use of land for bioenergy—whether through energy crops or the harvest of forest biomass—raises concerns over competition for land and the carbon neutrality of bioenergy (Field and Mach 2017; Searchinger et al. 2017). Research that focused on the trade-offs between bioenergy production, food security, and biodiversity found that less than 100 EJ /year. could be produced sustainably (Boysen et al. 2017; Heck et al. 2018), although such production levels would be dependent on strong global land governance systems (Creutzig 2017).

The carbon neutrality of bioenergy is based on the assumption that the CO2 released when bioenergy is combusted is then recaptured when the biomass stock regrows (EASAC 2017). Most land is part of the terrestrial carbon sink or is used for food production, so that harvesting for bioenergy will either deplete the existing carbon stock or displace food production (Searchinger et al. 2015, 2017). The use of harvested forest products (e.g., wood pellets) for bioenergy is not carbon neutral in the majority of circumstances because an increased harvesting in forests leads to a permanent increase in the atmospheric CO2 concentration (Sterman et al. 2018; Smyth et al. 2014; Ter Mikaelian et al. 2015). Leaving carbon stored in intact forests can represent a better climate mitigation strategy (DeCicco and Schlesinger 2018), because increased atmospheric concentrations of CO2 from the burning of bioenergy may worsen the irreversible impacts of climate change before the forests can grow back to compensate the increase (EASAC 2017; Booth 2018; Schlesinger 2018).

Bioenergy sourced from wastes and residues rather than harvested from dedicated land can be considered carbon neutral, because of the ‘carbon opportunity cost’ per hectare of land (i.e., bioenergy production reduces the carbon-carrying capacity of land) (Searchinger et al. 2017). The supply of waste and residues as a bioenergy source is always inherently limited (Miyake et al. 2012). Although in some cases, burning residues can still release more emissions into the atmosphere in the mid-term (20–40 years) than allowing them to decay (Booth 2018), there is general agreement that specific and limited waste materials from the forest industry (for example, black liquor or sawdust) can be used with beneficial climate effects (EASAC 2017). The use of secondary residues (cascade utilization) may reduce the logistical costs and trade-offs associated with waste use (Smith et al. 2014).

Land is a scarce resource. The use of land for nature conservation, agricultural production, residential areas, and industry, as well as for infrastructure, such as roads and all aspects of human settlements, limits the amount of land available land for utility-scale solar and wind projects. Furthermore, solar and wind generation require favourable climatic conditions, so not all available areas are suitable for renewable power generation. To assess the renewable energy potential of the available area, all ten world regions defined in Table 8 in Sect. 1 of Chap.  5 were analysed with the [R]E-SPACE methodology described in Sect. 3 of Chap.  3.

Given the issues involved in dedicated land-use for bioenergy outlined above, we assume that bioenergy is sourced primarily from cascading residue use and wastes, and do not analyse the availability of land for dedicated bioenergy crops.

This analysis quantifies the available land area (in square kilometres) in all regions and sub-regions with a defined set of constraints.

The following land-use areas were excluded from the deployment of utility-scale solar photovoltaic (PV) and concentrated solar power plants:

After the spatial analysis, the remaining available land areas were analysed for their solar and wind resources. For concentrated solar power, a minimum solar radiation of 2000 kilowatt hours per square meter and year (kWh/m2 year) is assumed as the minimum deployment criterion, and onshore wind potentials under an average annual wind speed of 5 m/s have been omitted.

In the next step, the existing electricity infrastructure of power lines and power plants was mapped for all regions with WRI (2018) data. Figure 7.1 provides an example of the electricity infrastructure in Africa. These maps provide important insights into the current situation in the power sector, especially the availability of transmission grids. This is of particular interest for developing countries because it allows a comparison of the available land areas that have favourable solar and wind conditions with the infrastructure available to transport electricity to the demand centres. This assessment is less important for OECD regions because the energy infrastructure is usually already fairly evenly distributed across the country—except in some parts of Canada, the United States, and Australia. For some countries, coverage is not 100% complete due to a lack of public data sources. This is particularly true for renewable energy generation assets such as solar, wind, biomass, geothermal energy, and hydropower resources.
Figure 7.2 shows the solar potential for utility-scale solar power plants—both solar PV and concentrated solar power—in Africa. The scale from light yellow to dark red shows the solar radiation intensity: the darker the area, the better the solar resource. The green lines show existing transmission lines. All areas that are not yellow or red are unsuitable for utility-scale solar because there is conflicting land use and/or there are no suitable solar resources. Africa provides a very extreme example of very good solar resources far from existing infrastructure. While roof-top solar PV can be deployed virtually anywhere and only needs roof space on any sort of building, bulk power supply via solar—to produce synthetic and hydrogen fuels—requires a certain minimum of utility-scale solar applications. The vast solar potential in the north of Africa—as well as in the Middle East—has been earmarked for the production of synthetic and hydrogen fuels and for the export of renewable electricity (via sub-sea cable) to Europe in the long-term energy scenarios in the 2.0 °C and 1.5 °C Scenarios.
Europe, in contrast, is densely populated and has fewer favourable utility-scale solar sites because of both its lower solar radiation and conflicting land-use patterns. Figure 7.3 shows Europe’s potential for utility-scale solar power plants. Only the yellow and red dots across Europe, most visible in the south of Spain, south of the Alps, south-west Italy, and the Asian part of Turkey, mark regions suitable for utility-scale solar, whereas roof-top solar can be deployed economically across Europe, including Scandinavia.

However, Africa and Europe are in a good position, from a technical point of view, to form an economic partnership for solar energy exchange.

The situation for onshore wind power differs from that for solar energy. The best potential is in areas that are more than 30° north and south of the equator, whereas the actual equatorial zone is less suitable for wind installation. North America has significant wind resources and the resource is still largely untapped, even though there is already a mature wind industry in Canada and the USA. Figure 7.4 shows the existing and potential wind power sites. While significant wind power installations are already in operation, mainly in the USA, there are still very large untapped resources across the entire north American continent, in Canada and the mid-west of the USA.
Unlike the situation in the USA, wind power in Latin America is still in its initial stages and the industry, which has great potential, is still in its infancy. Figure 7.5 shows the existing wind farm locations—marked with blue dots—and the potential wind farm sites, especially in coastal regions and the entire southern parts of Argentina and Chile.

The available solar and wind potentials are distributed differently across all world regions. Whereas some regions have significantly more resources than others, all regions have enough potential to supply their demand with local solar and wind resources—together with other renewable energy resources, such as hydro-, bio-, and geothermal energies.

Table 7.2 provides an overview of the key results of the [R]E-SPACE analysis. The available areas (in square kilometres) are based on the space-constrained assumptions (see Sect. 2.1 in Chap.  7). The installed capacities are calculated based on the following space requirements (Table 7.2):
Table 7.2

Note: Mapping Eurasia was not possible because the data files were incomplete.