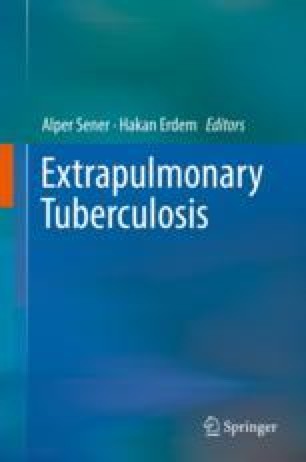 Tuberculosis in the ICU

Tuberculosis (TB) is one of the world’s most lethal diseases. In 2015, 10 million people worldwide contracted TB, and 1.8 million deaths were TB-related [1]. Although the trend in TB incidence has steadily declined in the last few years, special groups, including individuals that were homeless, prisoners, drug addicts, and foreign-born, were at the highest risk and had the least access to healthcare. In Turkey, a total of 12,772 tuberculosis cases were reported in 2015 [2].

Patients with TB are admitted to intensive care units (ICUs) at frequencies ranging from 1% to 3% [3, 4]. A timely diagnosis of TB is vital, because delayed treatment is associated with severe morbidity in the ICU. Thus, it is important for intensivists to understand the typical distribution, forms, and radiologic manifestations of TB. The incidence of TB among patients in the ICU is significantly higher than the incidence observed in the general population. Most patients with TB come to an end in the ICU, with multidrug-resistant TB. These patients have pulmonary TB and/or miliary TB with important comorbidities.

16.2 Tuberculosis Presentation in the ICU

Severe TB that requires ICU treatment generally presents as respiratory failure, and mortality rates range from 15.5% to 65.9% [3, 5, 6, 7]. Respiratory failure associated with pulmonary TB may occur with an acute disease, such as miliary tuberculosis, acute respiratory distress syndrome (ARDS), or bronchopneumonia; or it may occur chronically, as a disease sequel. Balkema et al. [8] showed that, for two thirds of patients, the primary reason for ICU admission was acute respiratory failure, mostly due to massive hemoptysis. However, the most common radiologic finding in their study was diffuse bronchopneumonia. Most infections were pneumonia infections caused by either Streptococcus or Staphylococcus aureus . Mycobacterium tuberculosis is frequently associated with pulmonary bacterial infections, most often Streptococcus pneumoniae infections, particularly in children. The Community-Acquired Pneumonia Organization (CAPO) maintains a database on a multinational cohort of adults hospitalized with CAP. This organization reported that, of the 6976 patients with CAP, 60 (0.86%) had infections caused by M. tuberculosis [9]. The intensivist might see patients with M. tuberculosis infections that appear to have severe CAP. A failure to diagnose a patient with CAP caused by M. tuberculosis may have serious consequences for both the healthcare worker and the patient.

The second most frequent reason that patients with TB require ICU admission is severe sepsis/septic shock. Most of these patients present with multiple organ failure (MOF), and they exhibit a higher mortality compared to patients admitted to the ICU for other reasons. Landouzy’s sepsis in disseminated TB is a rapidly progressive form of sepsis; it leads to MOF and death in an immunocompromised person, when not treated aggressively. Parisian neurologist, Louis Theophile Joseph Landouzy (1845–1917), first described this entity. This septic process typically arises in patients that are immunocompromised, but it can also occur in patients that are immunocompetent [10, 11]. However, other microorganisms must be ruled out to support the diagnosis of TB-associated septic shock or sepsis.

Some studies have reported HIV/TB coinfections in patients that are critically ill [4, 12]. Coinfections of HIV and TB occur frequently, and they are associated with greater mortality and worse outcomes than TB alone. These patients often present with atypical TB, and they may receive delayed treatment, due to diagnostic difficulties and impaired access to healthcare [4]. Severe immunosuppression, which is typically caused by HIV infections, is a known risk factor for TB [13]. Respiratory failure is the main reason for ICU admission among patients with pulmonary HIV/TB. Most of these patients present with disseminated TB. The recovery of M. tuberculosis from blood cultures is suggestive of disseminated TB, and 14% of patients with HIV have bacteremia. Other causes of ICU admission are severe sepsis/septic shock and coma/torpor. M. tuberculosis is a common etiologic agent of sepsis in populations with HIV-related disease, as observed in published studies [14, 15]. Research findings have suggested that patients with disseminated and extrapulmonary forms of TB may represent a special group that is associated with worse outcomes. Patients that are critically ill with HIV/TB have a high 6-month mortality rate, and the risk is strongly associated with the nadir CD4 cell count. Neurological dysfunction is also associated with poor survival, even without primary central nervous system involvement [12].

16.3 Tuberculosis Diagnosis in the ICU

TB should be confirmed by culturing patient specimens, when possible. Theses culture can confirm the diagnosis and also provide a means to test drug susceptibility. Specimens that can be cultured for a TB diagnosis include sputum, bronchoalveolar lavage, tracheal and nasogastric aspirations, cerebrospinal fluid, pericardial fluid, peritoneal fluid, urine, pleural fluid, lymph node aspiration, and blood.

Chest radiography (CXR) remains the first choice for the initial evaluation of patients with TB. There are few signs specific to TB for patients in the ICU; some studies have reported that small nodules or cavitary patterns on a CXR, combined with an illness duration of more than 2 weeks, may be indicative of TB [16]. Computed tomography (CT) scanning may identify active TB. The most common CT findings are ARDS-like manifestations, parenchymal nodular infiltration and cavitation, consolidation, interstitial involvement, a calcified parenchymal mass, ground-glass opacities, and pleural effusion or thickening. Nearly 50% of adults with TB display radiologic evidence of lymphadenopathy. Among all pulmonary manifestations of TB, the highest mortality rates were associated with ARDS-like manifestations on a CT (64.5%) and miliary TB (85.5%) [17]. Most patients have non-diagnostic CXRs and only display an abnormality on CTs. When considered early, CT scanning could substantially increase the ability to diagnose active TB. Many patients with active TB have been misdiagnosed and were given the wrong treatment.

16.4 Treatment for Patients with Tuberculosis in the ICU

Patients with infections should be isolated in rooms with negative pressure, and visitors should be limited. The isolation time will depend on the period of replication of the microorganism, the patient’s status, and the patient’s comorbidities, such as immunosuppression. A definite TB diagnosis is not always simple. When there is a suspicion of TB, treatment should be started immediately without waiting for culture results. Moreover, treatment should be continued, even when the first culture results are negative, and the clinician should continue to collect appropriate samples for culturing.

Acute TB is conventionally treated immediately with anti-tuberculosis chemotherapy and, when required, mechanical ventilation. Good results have also been achieved with noninvasive pressure support ventilation (NIPSV) and other adjuvant therapies [18, 19]. Adjunctive corticotherapy, like that used in meningeal or pericardial disease, was associated with survival in patients with TB [20]. Steroids might be effective in reducing mortality for all forms of TB that require intensive care admission, including pulmonary TB. Corticosteroids can reduce the 90-day mortality in patients with pulmonary TB, when admitted to the ICU due to acute respiratory failure [21].

In the event of either acute or chronic respiratory failure secondary to pulmonary TB, a patient might require ventilator support. Extracorporeal membrane oxygenation (ECMO) has been useful in several scenarios for maintaining oxygenation and perfusion in patients with irreversible cardiorespiratory failure. For patients with TB, ECMO was shown to be useful in cases of refractory shock, renal failure, liver dysfunction, and ARDS [11]. Alternatively, in selected patients, the need for invasive ventilation may potentially be avoided with careful use of noninvasive ventilation (NIV) in acute situations. However, the use of NIV in acute situations is associated with a potential risk of TB spreading [18, 22]. The intensivist must carefully weigh the potential benefits and risks, before deciding whether to initiate NIV or invasive ventilation in acute respiratory failure due to pulmonary TB. The risks related to positive pressure ventilation, such as hemoptysis and pneumothorax, should be taken into account [22].

16.5 Tuberculosis Outcome and Mortality in the ICU

Active TB that requires ICU treatment generally presents as respiratory failure that requires mechanical ventilation. Despite the availability of effective therapies, mortality rates for patients with TB in the ICU remain between 15.5% and 65.9% [3, 5, 6, 7]. This rate is more than twice that observed in patients with respiratory failure due to CAP [9].

Several studies have shown an association between delays in commencing anti-tuberculosis treatment and mortality [8]. It was reported that a 3–4-day treatment delay in hospital was related to a mortality rate of 33% for patients with TB in acute respiratory failure. The interval between ICU admission and anti-tuberculosis drug initiation was shorter in the group of survivors than in the group of non-survivors [23].

ICU mortality has been significantly associated with age, mechanical ventilation, MOF, ARDS, sepsis, vasoactive drugs, renal replacement therapy, a low Glasgow score, a high Simplified Acute Physiology Score (SAPS) II, a high Sequential Organ Failure Assessment (SOFA) Score, lymphopenia, hypoproteinemia, low serum albumin levels, and two concomitant non-tuberculous infections [3, 6, 7, 8, 9]. Failure of any organ can negatively affect the TB prognosis, and it is associated with increased mortality. However, among all potential organ dysfunctions, neurological dysfunction occurred more frequently in non-survivors than in survivors, even after excluding patients with primary CNS involvement [6]. HIV positivity was not a risk factor for mortality; a recent study reported a trend of improved ICU survival among patients with HIV/TB coinfections [6]. Among patients with HIV/TB coinfections, only a CD4 count of <200 cells/mm3 and the absence of lobar consolidation were associated with ICU mortality [8].

In conclusion, most factors associated with the risk of mortality in patients with TB are connected to the severity of organ failure. Other mortality risk factors (such as nosocomial infections) were actually related to intensive care processes. Clinical measures for managing TB should be aimed at supporting early diagnosis and treatment. An early TB diagnosis can contribute to better outcomes and, at the same time, break the chain of transmission.