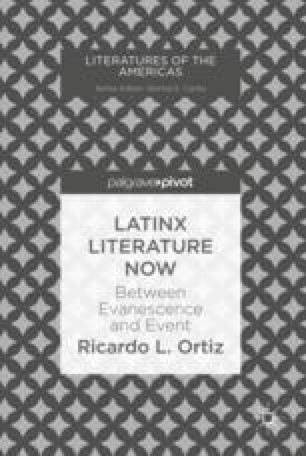 (Latinx) Literature’s Work: Between Being and Becoming, Product and Practice

This final section concludes the larger discussion by returning to a combined focus on the articulation of the paired concepts of latinidad and literature to argue finally for a critical recalibration of Latinx literary criticism’s inter-implicated and more than simultaneous commitments to both. It uses work by Horacio Legrás and Jean-Marie Schaeffer to trace the return of critical interest in the complex material, practical, laborious ontology of the literary, in the wake of but not necessarily in opposition to deconstruction, to model an alternative critical methodology for Latinx literary studies. The section closes by turning briefly to a story by Junot Díaz to demonstrate how this methodology might already be in performative practice in the literary work itself.

This essay hopes to make its own implicit case for the momentousness, for US Latinx literary studies as a field, of the turn from the first to the second decade of the twenty first century. Without offering an exhaustive list of publications, we can at least suggest that, beginning in 2007 with the appearance of Raphael Dalleo and Elena Machado Sáez’s The Latino/a Canon and the Emergence of Post-sixties Literature (Palgrave Macmillan, 2007), and following up with Ilán Stavans’ Norton Anthology of Latino Literature in 2011, then Kirsten Silva Gruesz’s PMLA review of the Stavans project in 2012, then Suzanne Bost and Frances Aparicio’s Routledge Companion to Latino/a Literature (Routledge, 2013), to John Morán González’s Cambridge Companion to Latina/o-American Literature (Cambridge UP, 2016), the field of US Latinx literary studies has certainly experienced an intense and perhaps definitive institutionalization, certainly at least as an academic publishing phenomenon, but also in perhaps less measurable ways as these projects facilitate the teaching of US Latinx Literature courses, organize if not settle what might serve as forms of foundational knowledge for scholarly and critical (and even creative?) work yet to come, and even more indirectly encourage the hiring of more faculty to teach in the field, as more university departments discover the depth, value, and legitimacy of that field, and start finally to feel the urgent need to teach it to an increasingly diverse, and increasingly Latinx, university student body. It is not the task of the present discussion, however, to replicate the work of these volumes, each of which opens with a helpful, informative introduction that makes the case for that project’s respective function and value, usually doing so by situating its specific contribution to the field in the context of the varying contributions of the other volumes listed here.