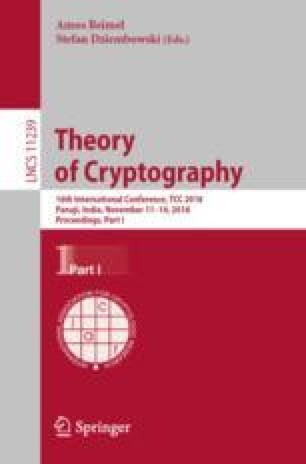 We additionally ensure that our protocols can be used, if needed, in the delayed-input setting, where the statement to be proven is decided only towards the end of the interaction. We also observe simple applications of our protocols towards achieving black-box four-round constructions of extractable and equivocal commitments.

We believe that our protocols will provide a useful tool enabling several new constructions and easy round-efficient conversions from non-black-box to black-box protocols in the future.

A. Srinivasan—Research supported in part from Sanjam Garg’s 2017 AFOSR YIP Award, DARPA/ARL SAFEWARE Award W911NF15C0210, AFOSR Award FA9550-15-1-0274, and research grants by the Okawa Foundation, Visa Inc., and Center for Long-Term Cybersecurity (CLTC, UC Berkeley). The views expressed are those of the author and do not reflect the official policy or position of the funding agencies.

We reiterate (a simplified variant of) the construction of online-offline robust randomized encodings from [21]. While they describe a complex protocol that uses adaptive garbled circuits in order to provide improved efficiency, in this paper we present a simplication of the scheme that does not rely on adaptive garbling.

Using this scheme, the construction of online-offline randomized encodings (which follows the ideas in [21]) is as follows: