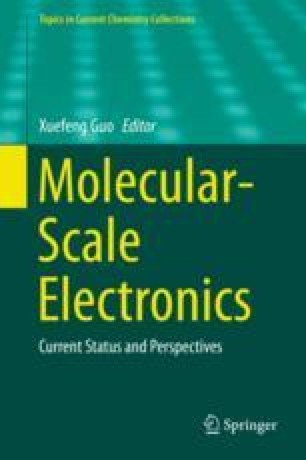 Towards Rectifying Performance at the Molecular Scale

Molecular diode, proposed by Mark Ratner and Arieh Aviram in 1974, is the first single-molecule device investigated in molecular electronics. As a fundamental device in an electric circuit, molecular diode has attracted an enduring and extensive focus during the past decades. In this review, the theoretical and experimental progresses of both charge-based and spin-based molecular diodes are summarized. For the charge-based molecular diodes, the rectifying properties originated from asymmetric molecules including D–σ–A, D–π–A, D–A, and σ–π type compounds, asymmetric electrodes, asymmetric nanoribbons, and their combination are analyzed. Correspondingly, the rectification mechanisms are discussed in detail. Furthermore, a series of strategies for modulating rectification performance is figured out. Discussion on concept of molecular spin diode is also involved based on a magnetic co-oligomer. At the same time, the intrinsic mechanism as well as the modulation of the spin-current rectification performance is introduced. Finally, several crucial issues that need to be addressed in the future are given.