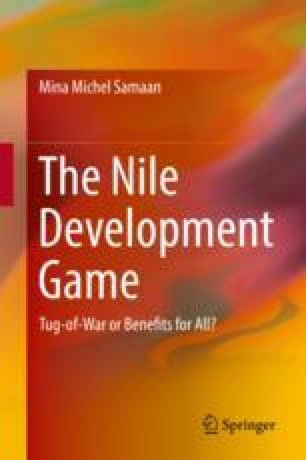 Conclusion: Tug-of-War or Benefits for All?

This book has been inspired by the dramatic changes occurring in the Nile Basin over the recent years. The study assumed that the water-related events in the basin represent only the tip of the iceberg and that the answer to the above question requires diving deep into the history in order to examine the entire picture portraying the Nile story. Instead of looking at the macro-correlation between causes and consequences of conflict and cooperation in transboundary river basins, the book aimed to closely investigate the process and mechanisms through which the status quo in the Nile Basin has been changing. The research hypothesis states that development on the Nile represents a Prisoners’ Dilemma game, whereby the equilibrium is driven by the changing contexts through their varying influences on the inherited heterogeneities among the different riparian countries.

History is a discipline widely cultivated among nations and races. It is eagerly sought after. The men in the street, the ordinary people, aspire to know it. Kings and leaders vie for it. Both the learned and the ignorant are able to understand it. For on the surface, history is no more than information about political events, dynasties, and occurrences of the remote past, elegantly presented and spiced with proverbs. It serves to entertain large, crowded gatherings and brings to us an understanding of human affairs. It shows how changing conditions affected (human affairs), how certain dynasties came to occupy an ever wider space in the world, and how they settled the earth until they heard the call and their time was up. The inner meaning of history, on the other hand, involves speculation and an attempt to get at the truth, subtle explanation of the causes and origins of existing things, and deep knowledge of the how and why of events. History, therefore, is firmly rooted in philosophy. It deserves to be accounted a branch of it.