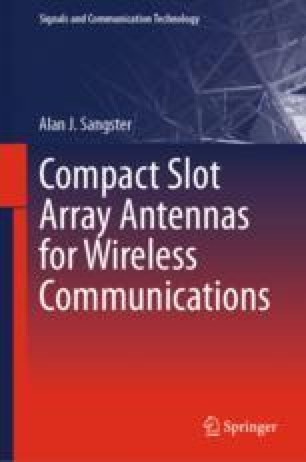 The simulation of radiation from a slot entails the solution of an electromagnetic boundary value problem, whereby within a defined space, usually termed free-space, a source of electromagnetic waves (the slot) is presumed to be present. It can be examined analytically by adopting the ‘source present’ Maxwell equations, as outlined here. While the resultant inhomogeneous second order vector differential equations can be solved directly, this is generally regarded as difficult and adds little to reader understanding. We choose therefore to employ analogies from statics to build engineering friendly solutions which emphasise the physics. Essentially we do this by borrowing the established mathematical forms derived in the analysis of static interactions, particularly those which relate static electric and magnetic fields to charge and current. This leads to the formulation of the scalar electric, and vector magnetic, retarded potentials, which are demonstrated to be solutions of the source present Maxwell equations. Thence, retarded potentials are applied to the classical ‘short electric current element’ which has become the fundamental building block for the mathematical modelling of a range of antennas of the wire and reflector type. Antennas of the aperture type, including the slot can be examined analytically in a not dissimilar process by employing the analogous ‘short magnetic current element’ as is demonstrated in Chap.  3. It is shown that the fields surrounding these current elements resolve into near field and far field forms. In the far field kor > 1 the solution is predominantly in the form of TEM waves radiating maximally in the plane bisecting the element and minimally in the axial directions. The pattern is ‘dough-ring’ shaped. The radiated energy density obeys the inverse square law, and in circuit terms the power radiated can be represented by a radiation resistance. In the near field, components of E and H other than the radiated fields exist. These fields diminish very rapidly with distance from the source, and are negligible for kor > 1. They represent capacitive (electric dipole) and inductive stored energy, which means that in circuit terms an antenna can present a reactive impedance to the feed line.

Current Element Auxiliary Potential Function Power Flow Density Inhomogeneous Vector Impressed Current
These keywords were added by machine and not by the authors. This process is experimental and the keywords may be updated as the learning algorithm improves.
This is a preview of subscription content, log in to check access.