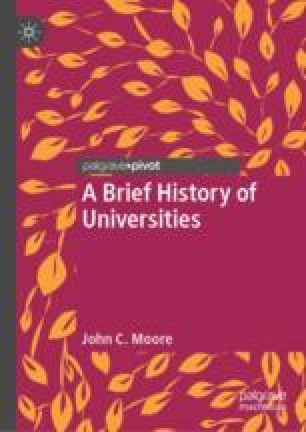 Moore continues his evolutionary theme of tradition and innovation. The century began with two World Wars, separated by the Great Depression. Nevertheless, the importance of universities continued to grow. Afterward, the Cold War between the Soviet Bloc and the West, the reversal of the West’s imperial empires, and the constantly expanding importance of science and technology set the tone. The same developments, along with the “sexual revolution” of the 1960s, were the setting for global student activism. The end of the Soviet Union and “nine eleven” marked the passage from the twentieth to the twenty-first centuries. Moore notes the ubiquity of computers and the economic and political turmoil of the early twenty-first century, and finally, offers his concerns about the future evolution of universities.