Indigenous Rhetoric and Survival in the Nineteenth Century 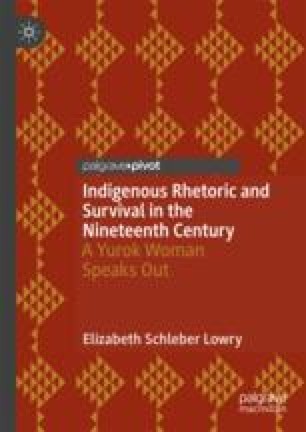 The Sacred and the Profane

Scholars have expressed consternation about Lucy Thompson’s decision to describe an ancient race of demigods—the wa-ga—as being “white.” While some have suggested that this choice implies an uncritical view of Euroamerican behavior during the Gold Rush and beyond, this chapter argues that Thompson makes this choice to deploy a strategy that rhetorician Kenneth Burke calls “perspective by incongruity.” As such, Thompson emphasizes the differences between these ancient demigods (wa-ga) and the new or “current” white race, the “ken-e-ah” in order to highlight the brutality and profanity of the ken-e-ah—and the lack of a sense of the “sacred” in ken-e-ah relationships.