Rise and Fall of the Carbon Civilisation 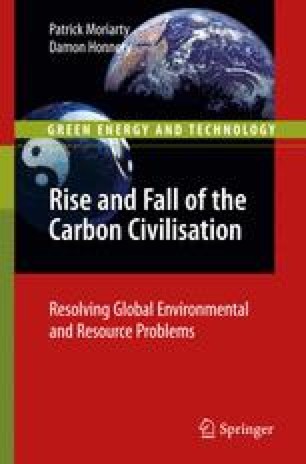 In this concluding chapter, we first give a detailed review of the main themes of the book; in brief, these are that the Earth faces a variety of environmental threats, and that the proposed technical fixes are not up to the task. Next, we try to get some idea as to what will happen if we continue our present path to the extent that the world eventually becomes 4 ºC warmer, which increase could result from a doubling of atmospheric CO2 concentrations. Arctic sea ice would disappear in summer, further decreasing local albedo. Coastal sea level rises and worsening conditions for agriculture in many regions would produce hundreds of millions of refugees, and forest fire frequency and severity would rise.

Finally, we look at another possible future, one in which we take seriously our predicament, and back it up with effective actions. This is in strong contrast to our present approach, which is a contradictory mixture of many international conferences about the precarious state of our planetary environment, combined with business-as-usual growth economics.

Visceral Leishmaniasis Lyme Disease Ocean Acidification Prefer Future Hockey Stick
These keywords were added by machine and not by the authors. This process is experimental and the keywords may be updated as the learning algorithm improves.
This is a preview of subscription content, log in to check access.

Cite this chapter as:
(2011) Conclusions. In: Rise and Fall of the Carbon Civilisation. Green Energy and Technology. Springer, London