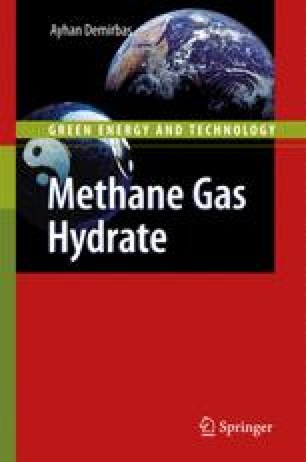 Natural gas (NG) is the fastest growing primary energy source in the IEO2003 forecast. NG consumption is projected to nearly double between 2001 and 2025, with the most robust growth in demand expected among the developing nations.

NG is formed deep underground, usually in areas around coal and oil. NG is composed primarily of methane. It does contain other chemical species, such as butane and propane. If the mixture is comprised only of these species, it is called dry NG, as there will be no liquid components at standard pressure and temperature. NG might also be mixed in with non-hydrocarbon compounds, such as water vapor, carbon dioxide, and hydrogen sulfide.

Over the next 20 years, the role of NG in global energy consumption will increase substantially. The speed of the transition to NG will be driven by environmental constraints, increased demand, and new technologies. A potential source of NG lies in enormous worldwide gas-hydrate reserves. It was estimated that the size of this resource range up to 20,000 trillion m3. These deposits can cause problems and safety concerns relating to drilling, production of oil and gas, and building and operation of pipelines. Naturally occurring gas hydrates are normally found at the seafloor or in shallow sediments where the pressures and temperatures are conducive to hydrate formation.

NG comes from the decomposition of organic matter, just like oil and coal. Unlike oil and coal, though, it can come from almost any organic matter, whereas coal comes only from plant matter and oil comes almost exclusively from plankton and microplankton remains. NG can come from both of these sources as well. Decay and millions of years of geological stresses have transformed the complicated organic compounds that once made up living plants or animals into a mixture of alkanes. NG is considered a fossil fuel because most scientists believe that NG was formed from the remains of tiny sea animals and plants that died 200-400 million years ago. NG is generally considered a nonrenewable fossil fuel. When these tiny sea animals and plants dies, they sank to the bottom of the oceans where they were buried by layers of sediment that turned into rock. Over the years, the layers of sedimentary rock became thousands of feed thick, subjecting the energy-rich plant and animal remains to enormous pressure.

For hundreds of years, NG has been known as a very useful substance. The Chinese discovered a very long time ago that the energy in natural gas could be harnessed, and used to heat water. In the early days of the NG industry, the gas was mainly used to light streetlamps, and the occasional house. However, with much improved distribution channels and technological advancements, natural gas is being used in ways never thought possible.

NG uses industrial, residential, electric generation, commercial and transportation sectors. NG is used across all sectors, in varying amounts. The industrial sector accounts for the greatest proportion of NG use in the United States, with the residential sector consuming the second greatest quantity of natural gas.

Concerns about acid rain and global warming will no doubt result in increased use of NG in the future. Two are as which could see expanded use of NG are fuel cells and transportation. Fuel cells are used to generate electricity, and operate something like a battery. The difference is that the energy for fuel cells comes from hydrogen, which can be made from NG. Fuel cells eliminate the need for turbines and generators, and can operate at efficiencies as high as 60%.

Trillion Cubic Foot Nonrenewable Fossil Fuel Lower Carbon Dioxide Emission Occasional House
These keywords were added by machine and not by the authors. This process is experimental and the keywords may be updated as the learning algorithm improves.
This is a preview of subscription content, log in to check access.