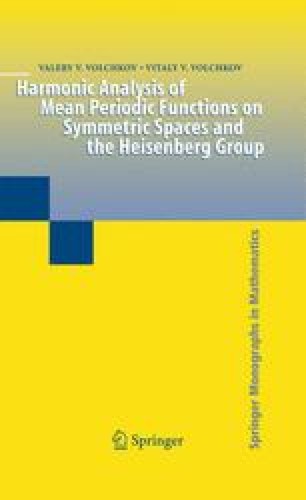 Recent Developments in the Spectral Analysis Problem for Higher Dimensions

The first half of the chapter deals with the Berenstein–Gay result, which is a first local version of the theorem on spectral analysis in ℝ n . Considerable effort has been devoted to finding exact conditions under which the Berenstein–Gay theorem remains true. Most of the results here are very precise. The second half of the chapter consists of applications to characterization problems for the so-called Pompeiu sets. These are sets in a Euclidean space such that any locally integrable function can be uniquely reconstructed from its integrals over this set and all the images of this set under rigid motions. The discussion culminates with a solution of the Pompeiu problem for the class of non-real-analytic functions and the result on the equivalence of the local and global Pompeiu properties.

High Dimension Rigid Motion Nonzero Function Convolution Equation Cylindrical Function
These keywords were added by machine and not by the authors. This process is experimental and the keywords may be updated as the learning algorithm improves.
This is a preview of subscription content, log in to check access.