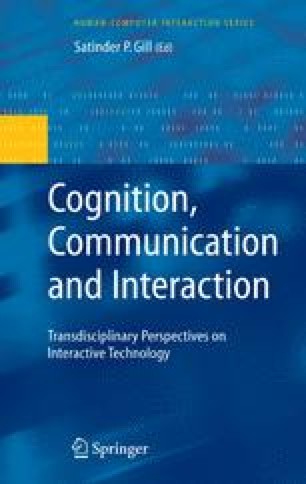 Skilled cooperative action means being able to understand the communicative situation and know how and when to respond appropriately for the purpose at hand. This skill is of the performance of knowledge in co-action and is a form of social intelligence for sustainable interaction. Social intelligence, here, denotes the ability of actors and agents to manage their relationships with each other. Within an environment we have people, tools, artefacts and technologies that we engage with. Let us consider all of these as dynamic representations of knowledge. When this knowledge becomes enacted, i.e., when we understand how to use it to communicate effectively, such that it becomes invisible to us, it becomes knowledge in co-action. A challenge of social intelligence design is to create mediating interfaces that can become invisible to us, i.e., as an extension of ourselves. In this paper, we present a study of the way people use surfaces that afford graphical interaction, in collaborative design tasks, in order to inform the design of intelligent user interfaces. This is a descriptive study rather than a usability study, to explore how size, orientation and horizontal and vertical positioning, influences the functionality of the surface in a collaborative setting.