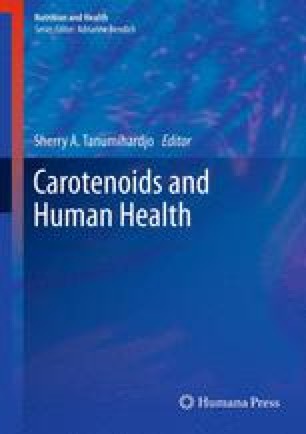 Biofortification of Maize with Provitamin A Carotenoids

Chapter
Part of the Nutrition and Health book series (NH)

Biofortification, or the breeding of staple food crops to increase their micronutrient density, is widely viewed as a valuable strategy for sustainably improving the nutritional status of some malnourished populations.

Vitamin A Maize Corn Biofortification Provitamin A carotenoids Vitamin A deficiency Agriculture Nutrition and health
This is a preview of subscription content, log in to check access.

Annex: An Introduction to Plant Breeding

Plant breeding is the science and art of modifying plants to better serve our needs or preferences. All plant breeding begins with identifying or creating genetic variation for the trait(s) of interest, followed by selecting those variants that are most desirable. If variation is extensive, and the trait is highly heritable, a term that quantifies the degree to which offspring resemble their parents, or the reliability with which parents’ characteristics can be expected to be reproduced in their offspring, then progress from plant breeding for that trait will likely be relatively fast and simple to achieve. Maize grain color varies and an ear may have kernels segregating for shades of yellow and orange. Deep yellow or orange kernels can be selected, planted, and expected to produce plants with ears that have kernels with deeper yellow or orange than the parental ear. This process would be largely an art, and would likely result over time in increasing the total concentration of carotenoids in the grain. Provitamin A carotenoids, however, cannot be visually distinguished, and selection for color, without relying on laboratory analysis is unlikely to result in maize biofortified with provitamin A.

The heritability of a trait is affected by several factors, including the number of genes involved in determining the expression of the trait, and the extent to which different growing environments alter the effect of each gene determining the trait. In general, the more genes involved, the less heritable the trait will be; simply put, the more complicated the trait, the less reliably we can predict its value based on that of its parents. Similarly, the more sensitive a trait’s expression is to variation in environmental conditions, for example heat, drought or acidic soils, the lower its heritability tends to be. The carotenoid biosynthetic pathway has been well-characterized (see, for example, 20, 61, 62, 63) and involves more than a dozen crucial genes, each of which has multiple forms, variants or alleles, capable of acting singly or in combination with other genes within or outside the pathway, resulting in different final carotenoid profiles and concentrations in the maize kernels. The huge numbers of possible combinations of alleles among the genes of the carotenoid biosynthetic pathway represent opportunities for plant breeders to select combinations that increase individual carotenoid concentrations, or the total provitamin A concentration in grain.

Most modern varieties of maize are hybrids, formed by crossing two parents to form a variety that has the best characteristics from each parent, and is therefore superior to both of them. Much of the effort in maize breeding is devoted to a painstaking process of identifying very unique pairs of parents that complement each other exceptionally well when producing offspring (the hybrid). Our primary interest is enhanced provitamin A concentration, but to be successful, a hybrid must also be high yielding, disease resistant, produce tasty grain, and have many more essential and desirable attributes. The effort is only useful if, once we create the outstanding hybrid, we are able to produce sufficient seed of it to plant many thousands of hectares year after year.

Maize is ideally suited for making hybrids because its female flowers (each maize kernel originates as a flower) are separate from its male flowers (contained in the tassel, at the top of the plant). By covering the young ear (with a small bag called a shoot bag) before any silks emerge from the tip of the ear leaves, breeders can pollinate the flowers of that ear with pollen collected from a tassel on the same plant or another plant. Pollinating an ear with pollen from the same plant, called self-pollination, results in a 50 % reduction in allelic variation, and repeated self-pollination for several generations results in an inbred line, which is genetically uniform, having for all genes only one, the same allele, on each chromosome. Inbred lines are pure breeding because self-pollinating them reproduces exactly the same line, which is a crucial feature for enabling hybrid varieties; once we develop pure lines and identify the specific combination of inbred lines that makes an excellent hybrid, we can produce the exact same hybrid over and over and over again, making seed available to many farmers for planting on large land areas during many years.

Several crucial activities are conducted during the process of self-pollinating maize plants to develop inbred lines for use in hybrid varieties. Highly heritable traits, such as resistance to many diseases, are evaluated for all lines, and only those with an acceptable level of resistance are self-pollinated, while all others—usually the vast majority—are discarded. Other traits, including grain yield in hybrid combination, are not highly heritable and breeders form experimental hybrids in parallel with the repeated self-pollination process. The hybrids are evaluated in multilocation trials and only the best hybrids, performing as well or better than commercial hybrid checks included in the trials, are selected. Breeders use the hybrid trial data to discard the vast majority of lines that are being self-pollinated in the parallel process of developing inbred lines. Plant breeding is thus a numbers game, and it is commonly said that only one of a million maize lines in a breeding program succeeds to be used in a commercial hybrid. Needless to say, a commercially successful inbred line is extremely valuable.

Commercial inbred lines, and elite lines that were nearly, but not quite good enough to become commercial lines, are used extensively as parents in crosses (usually with other elite or commercial lines) that are used to develop new inbred lines by repeating the long process of repeated self-pollination while selecting for all important traits. This process of elite or commercial line development, followed by their use in new breeding crosses to initiate new line development is indeed a variant of recurrent selection (described above).

Sometimes breeders wish to improve traits for which there is not sufficient or any useful variation among the elite and commercial lines. This has been the case for provitamin A carotenoid concentration, for which most commercial lines have <2 μg/g. Maize with 15 or 20 μg/g may only be found among landraces held in germplasm banks, or among lines from distant ecologies, and such sources of the desired trait (provitamin A in this case) must be used in breeding crosses despite their many defects which they will transmit to the offspring of these crosses. In such cases, the cross of elite line with source line is often back-crossed to the elite line one or more times in a process during which progeny with the desired trait are selected after each back-cross and prior to performing the additional back-cross. Back-cross breeding results in lines that are very similar to the elite parent, but have incorporated the desired trait(s) from the source parent. Back-cross breeding has been an important strategy in developing provitamin A biofortified maize.

Transgenes are no different from any other genes, except that they originate from a different species. All the breeding methods described above rely on combining genes (or alleles of genes) from one parent with those of the other parent to achieve in the offspring the desired values for traits of interest, such as provitamin A concentration. Back-cross breeding is a less-preferred strategy, when the desired trait cannot be found in elite or commercial lines. For some traits, however, the desired values may not exist in the crop species of interest, and it may be possible to transgenically introduce these alleles or genes from another species. In making golden rice, for example, inserting a gene from maize (phytoene synthase) resulted in rice with 30 μg/g of β-carotene [64], whereas common rice varieties have no β-carotene. Transgenic strategies have not been used in developing provitamin A biofortified maize, because the natural genetic variation in maize is sufficient to achieve the target of 15 μg/g of provitamin A carotenoids.

Not all improved and biofortified varieties will be hybrids. About 30 % of improved varieties, and about 50 % of all maize grown in sub-Saharan Africa are open-pollinated varieties (OPVs). An OPV differs in many ways from a commercial hybrid (see Pixley [65] for a discussion of advantages and disadvantages of hybrids relative to OPVs), but an OPV can be conceptualized as a hybrid with many parents, which may or may not be inbred lines. Some excellent OPVs have been created by inter-mating as few as five or six, or as many as 30 or more elite inbred lines. We are using this approach to develop and test OPVs that could be used as provitamin A biofortified varieties. As you might expect, it is easier to find two lines that make an excellent hybrid than to find 6–30 lines that form an equally good OPV (think that for every trait there will always be one or more “weak links” bringing down the overall performance of the OPV), so hybrids almost always out-perform OPVs. However, OPVs have the distinct advantage that farmers can save harvested grain for use as seed in several subsequent seasons, without much reduction in performance of the crop; by contrast, using harvested grain of hybrid varieties as seed generally results in important loss of performance, which is why farmers typically purchase new seed of hybrids each time they plant.