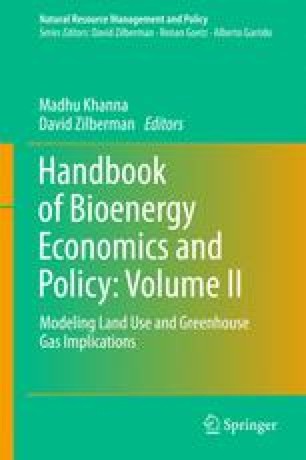 Lessons from the ILUC Phenomenon

The impact of greenhouse gas emissions on climate change occurs both through direct life cycle emissions and direct land use change as well as through indirect land use change (ILUC). The latter, in particulars are uncertain and front-loaded: land conversion leads to a large initial discharge that is paid back through reduced direct carbon intensity relative to fossil fuels in the future. This chapter discusses approaches to make policy decisions about accounting for ILUC effects in the presence of uncertainty about the magnitude of the effect and the need to balance a precautionary desire to delay investment till the uncertainty is resolved with the cost of delaying a switch from fossil fuels to biofuels. Given the temporal variation in the trajectory of emissions, policymakers should consider using metrics other than the cumulative discharges to capture the impact of emissions on the climate and the time profile of that impact and costs of positive and negative errors in incorporating ILUC effects in policy implementation. It is also important to recognize the presence of other market-mediated effects such as the fuel rebound effect that can also offset some of the direct savings in carbon emissions from switching to biofuels.

Research presented here was partially supported by the California Air Resources Board. This document does not necessarily represent the views or position of the ARB.

The most uncertainty-intolerant biofuels policy framework at present is the California Low Carbon Fuel Standard (LCFS). The machinery of the LCFS is simple in principle: every fuel distributor in the state annually calculates his annual average fuel carbon intensity (AFCI) as a sum of the fuels combined into motor fuel, weighted by their respective officially published GWI values. If this AFCI is below the gradually declining standard specified in the regulation, the fuel distributor has allowances to sell to other distributors; if higher, he must pay a fine or purchase allowances.

In this example, p is petroleum and b is a biofuel, and calculations are all per MJ of available fuel energy (diesel and electric energy receive an adjustment to account for their higher efficiency). Assuming biofuel costs more than fossil fuel and it is not being blended to the limit to minimize product cost, a lower value for G b will lead to cheaper compliance for the distributors. Though it was widely expected when the LCFS was developed that the main compliance paths for gasoline and diesel would be admixtures of maize ethanol and soybean biodiesel, the requirements of this policy are quite stringent. For example, if the “blend wall” for ethanol into gasoline is 20% (twice the current legal limit) and there is little market penetration of so-called E85 or flex-fuel vehicles (that can operate on any ethanol percentages) during the LCFS’ period of operation, compliance with a 10% carbon intensity reduction from gasoline’s 96 g CO2e MJ−1 requires “45-g” ethanol, a value almost no current domestic bioethanol can be shown to have even ignoring the indirect discharges from ILUC (Liska).