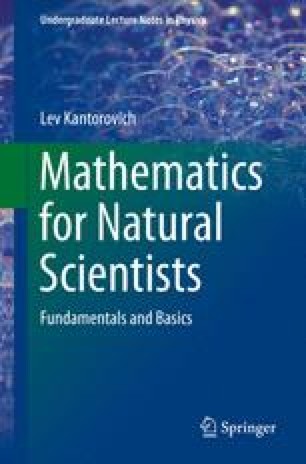 Functions of Many Variables: Differentiation

Mathematical ideas of the previous chapters, such as limits, derivatives and one-dimensional integrals, are the tools we developed for functions y = f(x) of a single variable. These functions, however, present only particular cases. In practical applications functions of more than one variable are frequently encountered. For instance, a temperature of an extended object is a function of all its coordinates (x, y, z), and may also be a function of time, t, i.e. it depends on four variables. Electric and magnetic fields, E and B, in general will also depend on all three coordinates and the time. Therefore, one has to generalise our definitions of the limits and derivatives for function of many variables. It is the purpose of this chapter to lie down the necessary principles of the theory of differentiation extending the foundations we developed so far to functions of many variables. In the next chapter the notion of integration will be extended to this case as well.